Home / Press Releases / Hilton Beats The Boss at bgo! Walks Away With £3.8 MILLION From £10 Bet 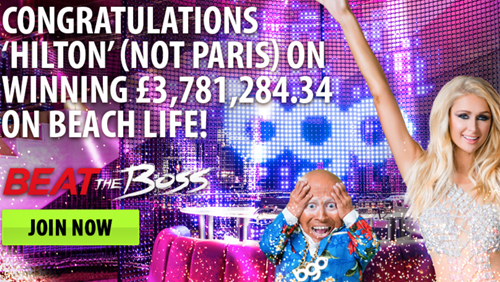 bgo.com the online gaming company recently announced the signing of Paris Hilton as a new brand ambassador joining “The Boss”, Verne Troyer as the face of the brand also starring in a brand new UK TV campaign.

The TV campaign launched just over a week ago and shortly after airing, a player from Nottinghamshire with a similar username to the Beverly Hills Heiress has scooped a huge jackpot win of £3,781,284.34 by placing a bet on the Beach Life slot machine of just £10!

“I’m still in shock” – Said ‘Hilton ’ “Things like this usually happen to other people. I don’t have big plans to spend all the money but my Mum and my Dad will be getting their bungalow. My nieces and nephews will be getting a good start in life. I may even take a short break and treat my best friends.. WOW, I’m still shocked”.

bgo were quick to react to the win. ‘The Boss’ (Verne Troyer) who was told about the win while enjoying his 4th of July holiday weekend at his LA home recorded this hilarious video to congratulate the winner.

The win is the largest payout the site has ever made and is the second largest in the history of the ‘Beach Life’ slot machine. Ohad Narkis of bgo commented, “I’d personally like the congratulate the player. This is a very exciting win and a life changing amount of money for anyone. The Hilton similarity is ironic and actually quite funny as we just launched our new TV campaign starring Paris. This win really puts bgo on the map as the best site to play online casino games and slots.”