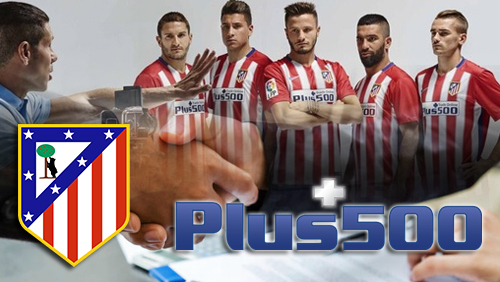 The retail Forex and CFD broker Plus500 has extended its shirt sponsorship deal with Spanish La Liga Club Atlético de Madrid for the next two years.

As part of the deal, announced on Thursday, the Plus500 logo will feature as club’s official sponsor on the front of the kit and Atlético’s Champion’s League kit for all matches, including the UEFA Champions League.

Plus500 will also enjoy a range of branding rights at the Vicente Calderón Stadium.

The relationship between two organization started in January, in which Plus500 became one of the sponsors of Atlético de Madrid and featured at the back of the club’s shirt since the first leg match of the King’s Cup round of 16 against Real Madrid.

“We are honoured to extend our partnership with such an illustrious football club as Atlético Madrid for at least 2 more seasons, which has established a strong pedigree for well over 100 years,” said Plus500 CEO Gal Haber. “Atlético Madrid is a natural fit for us as Europe is our largest customer base, and we share with them a passion for striving for success whilst having an ethos of transparency and respect for our customers, fans, partners and employees. In addition, this partnership with one of the most successful clubs in Europe that plays in one of the most popular leagues in the world will help us in furthering our strategy of increasing our brand recognition and expanding our customer base globally.”

“We are delighted to have expanded the partnership agreement with Plus500. This is an exciting period for the club as – like Plus500 – we grow our international footprint. We believe that this partnership with Plus500 will support this progress, and we look forward to sharing our journey with them,” added Atletico Madrid CEO Miguel Ángel Gil Marín.

Plus500’s football sponsorship is a good publicity amidst the controversy that has been surrounding the trading firm after the UK Financial Conduct Authority (FCA) scrutinized the systems that it has in place to prevent money laundering.

The company is now in the middle of overhauling its money laundering regulations, re-checking the identity of every customer at its UK business and selling the company to potential buyer, Playtech.