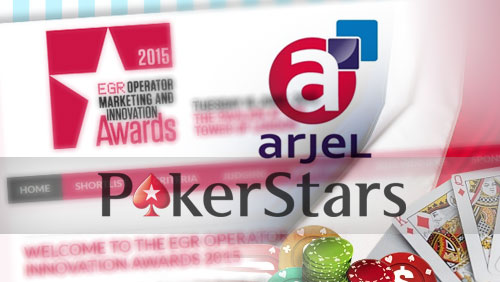 The world’s largest online poker network has won the Online Gaming Brand of the Year and Best Tablet App Awards at the EGR Operator Marketing and Innovation Awards 2015 in London, as well as securing their French license renewal.

PokerStars won two awards at the EGR Operator Marketing and Innovation Awards 2015, held at the Pavilion at the Tower of London on Tuesday.

Comedian Chris Ramsey hosted the glitzy ceremony, and the world’s largest online poker room walked away with the trophies in the Online Gaming Brand of the Year and Best Tablet of the Year categories.

“Our ‘red spade’ continued to thrive as the brand of choice for poker players over the last year, thanks to a distinctive and consistent brand message that is delivered by a great team around the world. We are very proud and grateful that all our efforts have been recognized with this award,” said Chris Herd, PokerStars’ Global Creative Director.

It was a good turnaround for PokerStars. In 2014, they came away from the same awards ceremony empty handed, after Unibet cleaned up the poker awards. However, they did pick up the Poker Operator and Mobile Poker Operator of the Year awards at the EGR Operator Awards in November.

In other PokerStars related news the Red Spade are amongst a bunch of online operators that have received five-year license extensions to continue operating in the French online gambling market.

PokerStars original license, which was granted in May 2010, had recently expired, and the French online gambling operator L’Autorité de Regulation des Jeux en Ligne (ARJEL) believed they were worthy of a renewal.