Lee Davy brings you the three biggest news stories of the football world this weekend, including one of the most one-sided FA Cup Finals you will see in living memory, a FIFA indictment, and Rio Ferdinand announcing his decision to retire from football. 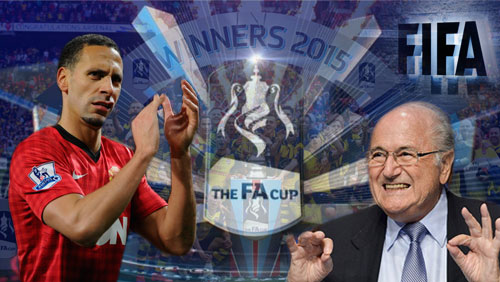 If you were a Martian, the thought of watching an Arsenal v Aston Villa FA Cup Final may have piqued your interest. Arsenal were looking to win two FA Cups on the spin, and become the most successful FA Cup team in the tournament’s history, and Aston Villa had won the FA Cup seven times.

Anyone who knows football knew that this was going to be nothing but a whitewash. Villa, could easily have gone down this year, and quite how they ended up on the grand stage is beyond me. Tim Sherwood has done a job, but he will have his hands full next season, there is no doubt about that.

We haven’t seen such a one-sided final since Man Utd playing games with Millwall back in 2003-04. It was men against boys. The annoyingly injury-prone and inconsistent Theo Walcott once again showing what he is capable of when everything comes together for the lad, volleying the Gunners into a lead they never looked like surrendering, and never did.

The Gunners Player of the Season Alexis Sanchez once again underlining his worth with one of the greatest goals in FA Cup Final history, Per Mertesacker made it three, and the Frenchman Olivier Giroud knocked in number four in the 90th minute.

Arsenal has now won the FA Cup a record 12-times. A very impressive record, but can they turn that success into a Premier League or Champions League victory? I don’t think so. Not quite yet.

FIFA Officials Staring Down the Barrel of the Gun

A whole host of FIFA officials are staring down the barrel of a gun, after The U.S. Justice Department unsealed a 47-count indictment, containing charges related to racketing, wire fraud and money laundering.

It’s not the contents of the indictment that surprises anyone. It’s the fact that someone has finally grown the kahuna’s necessary to do something about it. The only shame for FIFA haters will be the omission of the controversial president Sepp Blatter from that list of naughty boys.

A statement by Attorney-General Loretta Lynch stated the indictment: “alleges corruption that is rampant, systemic, and deep rooted both abroad and here in the United States. It spans at least two generations of soccer officials who, as alleged, have abused their positions of trust to acquire millions of dollars in bribes and kickbacks.”

Amongst those who face an uncomfortable few months are Chuck Blazer, a former U.S. Representative on FIFA’s executive committee; two sons of former vice-president of FIFA, Jack Warner – and Warner himself – and FIFA vice-president Jeffrey Webb. It’s believed $150 million has passed between dirty hands in the years questioned by the indictment.

Most of the headlines allude to corruption in connection with the allocation of the 2018 & 2022 World Cups. Russia and Qatar were given the go ahead to host those tournaments. Speaking at a press conference FIFA spokesman Walter de Gregorio said the decision to award those two nations the rights to host the World Cup will not change as a result of the indictment.

The news of the indictment is timed perfectly, after former Real Madrid and Barcelona star, Luis Figo, withdrew from the FIFA Presidential race claiming the whole process was fixed in Blatter’s favor. Blatter beat Jordanian Prine Ali bin Al-Hussein to win a record fifth term. Al-Hussein told the press that he had contacted authorities after being approached by someone claiming that the election could be rigged in his favor.

Speaking to Sky Sports, a clearly annoyed Figo said, “If Mr. Blatter were minimally concerned about football, he would have given up the re-election. If he has a minimal of decency, he will resign in the next few days.”

Former Manchester United and England captain, Rio Ferdinand, has announced that he will be retiring from the game with immediate effect.

The 36-year old announced the news days after being released by his club QPR. It was a drab way for him to go out, after only appearing 12 times since he moved to the club after 13-years as a Manchester United great.

A statement from Ferdinand said: “After 18 years as a professional footballer, I now feel it’s the right time for me to retire from the game that I love.”

He thanked Chris Ramsey, Harry Redknapp, David O’Leary, and David Moyes, but left special praise for the man who was on hand to witness Ferdinand at his absolute prime.

“Winning trophies over my 13 years at Manchester United allowed me to achieve everything that I desired in football. None of that would have been possible, without the genius of one man, Sir Alex Ferguson. His greatest accomplishment in my eyes will always be how he developed us as men, not just as footballers. He will in my opinion, always be the greatest manager in British football history.”

Ferdinand also paid special tribute to his wife Rebecca, and his family. Rebecca died of breast cancer in May. She was only 34-years of age. She left behind three children, who can now enjoy the full attention of their father after he walks away from the game as a  true legend.