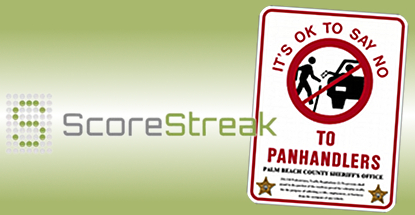 ScoreStreak launched with great fanfare a year ago but the company disabled registration and real-money play on its website this week. A message posted to the site’s frequently asked questions page said the service was being “paused over the next few weeks” but didn’t offer a more specific timeline on when the site might be back up and running.

Players are barred from making further deposits but can request withdrawals of their account balances. However, withdrawals for non-depositing users will only be processed “once our next round of funding is complete.”

Which brings us to the reason behind ScoreStreak’s ‘pause’. With admirable frankness, the FAQ states: “Simply put, we need to raise more money.” ScoreStreak says that while it has “grown our users and contest entries each month … our expenses are still higher than our revenues.” Without the money to pay technical or support personnel, ScoreStreak says it had little option but to hit the pause button.

ScoreStreak secured $1.2m in startup cash a year ago after winning the Fantasy Sports Trade Association’s Elevator Pitch contest, but this fuel has evidently been exhausted. An email sent to players indicated that the company had begun looking for a further $5m in investment capital late last year but “the process has taken longer than any of us expected.”

ScoreStreak had attempted to distinguish itself from the FanDuels and DraftKings of the DFS world by eschewing the salary-cap model and allowing players to draft whatever athletes they wanted. The kicker was that ScoreStreak players had to select specific sport-related goals for each drafted athlete – like how many rushing yards an NFL running back would notch — with more points awarded depending on how lofty you set these goals.

Whether temporary or permanent, ScoreStreak’s misfortune underscores the perils facing DFS investors. To date, not one DFS operator – even the aforementioned top two sites – is believed to have turned a profit, relying instead on a steady stream of deep-pocketed sugar daddies and the promise that profits will come as the industry matures and a critical mass of players signs up.

Not to say that many investors don’t remain highly bullish on DFS potential. On Wednesday, Spring Owl Asset Management founder Jason Ader told CNBC’s Fast Money program that DFS “has the potential to be as big as Macau over time.” Ader believes millennials “don’t like the traditional gaming experience” and will opt for DFS over slots any day.