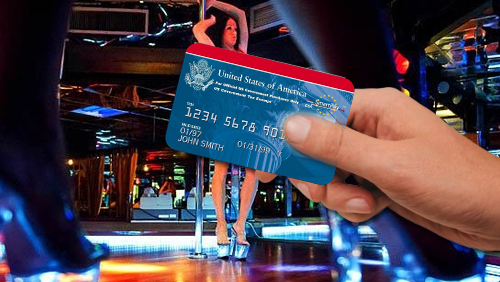 According to the Pentagon’s inspector general, Defense Department credit cards were used to charge personal expenses at casinos and “adult entertainment establishments” including a Larry Flynt’s Hustler Club and the Sapphire Gentlemen’s Club in Las Vegas.

There were 900 charges on the cards for adult entertainment including $4,686 for Sapphire Club, $1,614 for Flynt’s Hustler Club, $2,100 in Vegas Showgirls club, $308 to the Dreams Cabaret, Some 4,437 transactions were made at gambling establishments, including Maryland Live Casino in Hanover and the Pechanga Resort and Casino in Temecula, California.

The inspector general’s report indicated that the Pentagon’s method for blocking the merchant category codes for casinos and strip clubs were ineffective, as was the Travel Management Office’s automatic tool, which provides automated, real-time notification of “high-risk” declined transactions.

The report also added that unless the Travel Management Office and service managers “improve oversight actions, improve internal controls” and “provide written prohibition” against charges with high-risk merchants, personnel will continue to improperly use their card at casinos and adult entertainment establishments.

Grassley said through a spokeswoman that personnel’s credit card use requires periodic audits, “specifically to keep on top of charge card abuse and hold agencies accountable for implementing the required internal controls.”