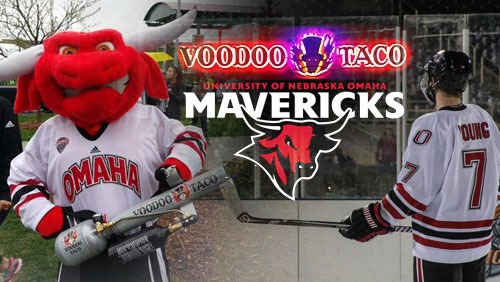 Fans of the Omaha Mavericks will be delighted to hear that they will be pelted by flying tacos after the University of Nebraska Omaha teamed up with a local eatery to fire tacos into the stand during hockey games.

Fans of the Omaha Mavericks are going to be settling into life in their new $81.6m stadium. But screw that. Who cares about any of that old nonsense? All the talk in Nebraska, Omaha is of flying Tacos.

The University of Nebraska has teamed up with local eatery, Voodoo Taco, to pelt the crowd with ready to eat Tacos during games played at the new stadium.

Firing merchandise into American sporting stadium’s fired through air powered cannons is not a new thing in American sport. Everything from t-shirts, to stuffed toys, and soft balls are flung into the crowd during matches – but food?

The brainchild is Voodoo Taco owner Eric Newton. He told the press that when he first thought of the idea, his friends thought he was a goal tender short of a hockey team – now they think it’s the best invention of modern times.

The invention has already paid dividends for Newton with news of the flying Tacos spreading quicker than a dose of the clap during medieval times.

“It won’t be restaurant quality when it gets to them, but it’s edible.” Newton told the press.

Fans worried about getting salsa and guacamole on their Mavericks game gear needn’t worry. Each taco will be tightly wrapped in tin foil ensuring the Mexican mouth melter arrives at your seat ready to eat.

Let’s hope the Mavericks have got there insurance polices updated. In 2010, a Kansas City Royals fan sued the club after their mascot “Sluggerr” was a little too accurate with his hotdog flinging antics.

The mascot was hurling hot dogs into the crowd when one of them hit John Coomer, from Overland Park, in the eye. The recipient of the hot dog ended up with a detached retina and sued the team for negligence.

A civil trial at a Jackson County court found that it was all Coomer’s own fault for being present at the time of the hot dog flinging. They came to the conclusion that as he was at the ground, and aware that hot dogs could possibly hit him in the eye, then it was all his own fault.

The last news I could find on the subject was that Coomer had successfully managed to persuade the Supreme Court to give him a second chance, and the case was passed back to the local level for a second hearing.