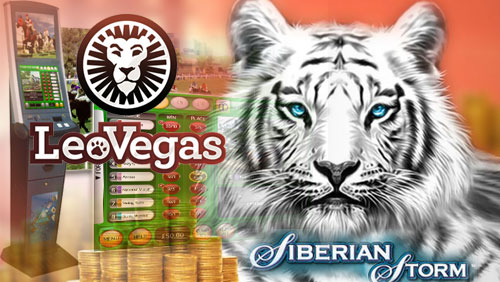 A 49 year-old man from a small town in Sweden has won £570,407 after playing online slots on the mobile casino site LeoVegas.com. The winner, who wishes to remain anonymous, has already placed donating to charity and starting his own betting business at the top of his shopping list.

The lucky slots fan said: “I was at home when I won and I was in total shock, I had to get my son round so he could confirm what I saw on the screen was true. When we were 100 per cent sure I’d won both of us had to struggle to keep the tears away.”

The player’s win happened four days before his 49th birthday while he was playing the Siberian Storm – Mega Jackpot game. But his plans for what to spend his new-found fortune on don’t include a big cake, instead he wants to get into the gaming industry himself: “I want to use the money to open my own business – a kiosk for people to place horse racing bets – so I can leave something for my children when I retire,” he said. “I also want to start giving money to charity on a regular basis.”

It’s been a particularly fruitful 2015 for LeoVegas.com customers, with this £570,407 win coming only two months after another Swede scooped the LeoVegas £4.4m Mega Fortune jackpot – the biggest prize ever won on a mobile device.

Shenaly Amin, UK country manager for LeoVegas.com, said: “2015 has been a fantastic year for LeoVegas customers and we’re always happy to hear about their plans for spending their winnings, especially when it involves donating to charity. We’re also looking forward to hearing more about the winner’s plans to open his own betting shop.

“As well as being a great month for our customers, March also marked the end to a fantastic first twelve months of LeoVegas trading in the UK, so it’s celebrations and champagne all round.”

LeoVegas is an online casino that provides world-class game entertainment and offers over 350+ games on mobile, tablet and your computer. LeoVegas is Europe’s fastest and most user friendly mobile casino. LeoVegas offers a completely new standard for what you can (and should) expect from your mobile phone.

• “LeoVegas is leading the way into the mobile future” – GIQ 2013, Gaming Intelligence Publication

• Power 50 – After less than 2 years of operations, LeoVegas was placed on the EGR Power 50 list of the most influential gaming operators