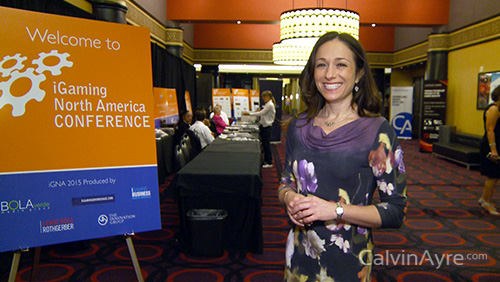 iGaming North America has officially kicked off at Planet Hollywood in Las Vegas, an event dedicated to opportunities within and regulation surrounding the US iGaming Market.

Over the course of the next three days, several hundred gaming professionals will gather for sessions, lunch meet-ups, post-conference drinks and whatever else one gets up to when spending time in Las Vegas.

Day one of the event attracted a solid crowd, with an almost full house assembled for the opening session, a 2015 Visionaries Panel covering the state of the industry.

Unfortunately two of the key speakers, David Baazov and Brian Mattingley, were unable to make it last minute but Gavin Isaacs of Scientific Games and Renato Ascoli of IGT with Sue Schneider as moderator delivered a solid session.

Topics covered included legislation, how to compete with internationally regulated sites, payment processing, lotteries, social gaming and how to appeal to the younger demographic.

“iGaming in North America is at a flex point”, said Isaacs.  He mentioned the complex level of approvals the land based industry had to go through fifteen years ago and said it’s a positive thing the regulators share the same ideas when it comes to iGaming, something that will hopefully speed up the process of regulation.

“We’re at the mercy of legislators, but in the meantime social gaming continues to do quite well”, he said. 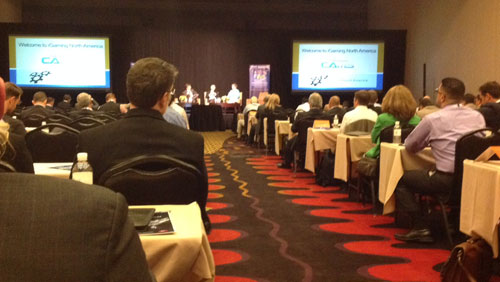 Scientific games has recently entered the social casino space with their Fantasy Springs partnership in California and Isaacs said social is “a great way to link the experiences between online and land based”.  He described social as a “good niche product” with a little bit of crossover.

When it comes to appealing to the younger generation, Ascoli said its all about the relationship with players and they all want recognition.  Isaacs said Scientific Games invests in R&D to figure out what kind of games and concepts will appeal to the younger generation and that it’s a “work in progress”.  He also said he doesn’t believe casinos or casino games are going away and the next generation will still want to play casino games in some capacity.

Daily Fantasy Sports (DFS) are of great interest to our industry and such games are currently legal in America.   The prevalence of DFS is exploding in the United States and DraftKings is one of the main players in the market.  Jason Robins, CEO of DraftKings, was a popular speaker today and during his presentation he covered the size of the Fantasy Sports market, the importance of partnerships with the major leagues in the US for building trust with customers and how DraftKings plans to further integrate sports viewing experiences.

Following Robins’ presentation the floor was opened up to questions and an interesting one was asked by Josh Thomas in regards to PokerStars and if their launch of a DFS offering is a threat.  Robins said it would be difficult for any brand to overtake DraftKings and FanDuel because they have a lot of industry share right now and his strategy is to actually to partner with such companies.

“Inevitably there will be more competition, especially if they want to invest millions”, he acknowledged.

The final session of the day, “State of the states”, featured Delaware State Rep. Helen Keeley as moderator with California Assemblyman Make Gatto, Pennsylvania State Senator Robert Tomlinson and New York Assemblyman J. Gary Pretlow all Skyped in as panellists.  Despite some technical difficulties, the panel proved to be a productive one and everyone agreed Keeley did a fantastic job as moderator.

While the tax rate is quite high for gambling operators in the state, in general the land based casinos are interested in iGaming and are waiting for the hearings.  Of course Pennsylvania is home to a Sheldon Adelson property and clearly he is absolutely against iGaming, but Pennsylvania is also home to a Harrah’s property and they are very much for it.  “The rest of the casinos are somewhere in the middle”, Tomlinson said.

Tomlinson spoke of his staff’s feedback on the verifications and securities iGaming companies have to go through in New Jersey and in fact, he now believes there is more control online than in land based. Despite scepticism at first, he and his staff now see the GPS systems are solid and the technology in general is impressive. “I’m very impressed with what they’ve done”, he said.

When it comes to compacting, Tomlinson said he can see the possibility of interstate compacting for online poker but not for casino.

Online gambling regulation in New York does not appear to be a priority and according to Pretlow, iGaming “really hasn’t taken off yet” and it will probably be limited to online poker.

In regards to the potential of compacting he said, “I really don’t see a compact in the near future or even the quasi distant future”.  However, New York is ready for land based sports gambling (no online) and would be prepared to pull the trigger if New Jersey wins their fight.

Much to our dismay, Gatto said he is not optimistic anything will happen in California this year with respect to regulation- he was optimistic at the beginning of the year, but nothing has happened so far, so he’s since changed his mind.

Gatto is also not optimistic about compacting in the near future.  He can see why its of interest to the smaller states, but California is unique in its size and there is clear market evidence they could do it alone.

One other interesting point to mention is all three panellists participating in this session confirmed the lotteries have not been a part of the conversations when it comes to iGaming within their respective states.