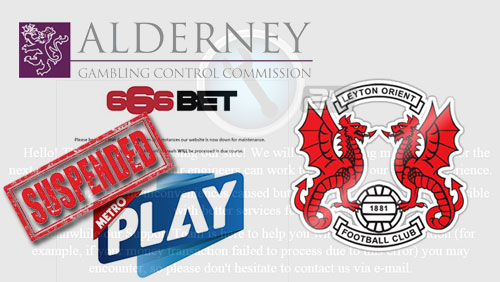 Due to the suspension, Metro Play and its business associates can no longer register any new customers or accept deposits from existing customers and are required to process all customer withdrawals immediately on request.

“The grounds for the decision to call the licensee to a hearing of the Commission and to suspend its license relate largely to serious concerns about the existing control and management of Metro Play,” said Wilsenach. “It would not have been in the interest of customers, the eGambling industry or the reputation of Alderney to allow Metro Play to continue its operations.”

Metro Play received its AGCC license in 2012 and was granted a continuation license by the UK Gambling Commission in November 2014.

Meanwhile, League One football club Leyton Orient has terminated its official t-shirt sponsorship with 666Bet after the operator’s license was suspended.

In a statement posted to its website on Monday, Leyton Orient confirmed that it had terminated its sponsorship deal with 666Bet for the 2014/15 season as a result of the temporary suspension of Metro Play’s license.

“The Club will make an announcement later in the week in regards to shirt branding for the remainder of the Sky Bet League One season. The Club will be making no further comment at this stage.”

666Bet’s sponsorship deal with Leyton Orient was announced in August 2014. The operator also has sponsorship deals with Premier Leaguers West Bromwich Albion and Leicester City FC and it remains to be seen whether the pair will follow suit in terminating their partnerships with the operator.