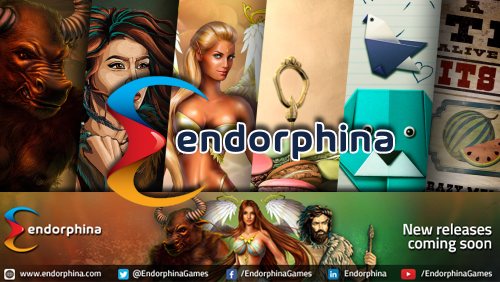 A game release? A double release? Three new games at one go? Still not enough for Endorphina, a Czech-based online gaming software provider. They are bringing you 6 brand new games today and more coming shortly.

Endorphina showed it’s power at ICE Totally Gaming last month and they have been growing since. Working hard on new games, they are bringing you 6 unique games and we are confident to say that every single player will find their favorite game on the list.

There is a romance in the air with Macarons, 5-reels, 10-lines slot that takes you to Paris. While playing, you will be enjoying a bottle of the finest champagne as a Wild Symbol as well as an engagement ring as a bonus. We are saying yes to this game. And you?

Second on the list of new games is Fairy Tale, a new high volatility 20-line, 5-reel slot game that is featuring unlimited free games with growing multiplier. Free spins carry on until the player finds 4 keys and let all doves out from cages. Each one of opened cages increases a multiplier.

Origami is definitely a game to remember because it had become favorite among people before it was actually released and we are not wondering why. This 10-lines, 5-reels slot is much fun and you will adore the Cat, an additional multiplier to your prizes.

Even though Endorphina is innovative and creates unique and trendy games, they want to stay classic at the same time as well. This proves Wild Fruits, a classic fruit slot featuring 5 reels and 50 lines. And it wouldn’t be the real wild west without a Wild Symbol and a sheriff’s star as a Scatter.

Stone Age takes players on a dark and mysterious journey to a prehistoric period. This latest 5-reels, 20-lines video slot is a game for big players. Once you get 3 or more Scatters on the screen, not only you get 10 free games but also a special expanding symbol.

Finally, it’s Minotaurus, a 5-reels, 10-lines video slot featuring Greek mythology inspired full-reel high Minotaurus as a Wild Symbol that appears randomly and is triggering re-spins. Endorphina is bringing you a special gamble game in this video slot – are you going to find your way out of the Labyrinth and get back to the princess?

Stepanka Chmelarova, Marketing Manager from Endorphina on March releases: „I’m really excited that these games are live and available for players now. All of them got a very positive response at ICE and especially Origami just rocked it. And we are keeping more fantastic games to be released later on this year so I’m pretty positive that we will have a game for every single player.“

Will the future of Bitcoin technology in online gambling be bright?
Press Releases
11 May 2015