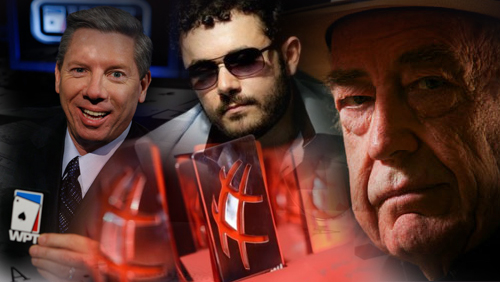 Lee Davy pores through the weekly news stories including Mukul Pahuja and Mike Sexton stirring up a little C&C, and the Godfather of Poker having surgery to remove a melanoma and then back to the tables within a week.

Sometimes writing this column is like eating soup with chopsticks, but this week I got a big spoon.

We start with the reigning World Poker Tour (WPT) Player of the Year, Mukul Pahuja. Talk about a man on a tear. The Florida native had made the trek to Maryland to play in the state’s first World Series of Poker Circuit (WSOPC), when he took to twitter to share a four page iPhone notes account of all the things pissing him off.

It seems the spark that ignited the Pahuja petrol bomb came from the organizers of the WSOPC Baltimore Main Event. They took the rather crass approach of advertising a $1m guarantee, after the prize pool had topped $960,000.

“The blatant disregard for our collective intelligence is straight up nauseating.” Tweeted Pahuja.

Phil Hellmuth was playing in the event. He had a different point of view.

He even capitalized it.

Meanwhile Pahuja was busy figuring out a way of solving this problem. His solution was to suggest that somebody create a player’s council. There were two things that struck me about this suggestion. I didn’t read anywhere where Pahuja was going to take responsibility, and do something about the issue he was complaining about, i.e. form a player’s council. And if Pahuja doesn’t want the baton, he certainly doesn’t want it to fall into the hands of Hellmuth after calling him a cheeseburger salesman. Hellmuth took it in his stride though. Reminding Pahuja that the national exposure of the Carls Jr ad was a good thing for poker.

Pahuja also had a poke at the tournament organizers saying they were putting their bottom line before customer value. A good point well made, before he watered it down with the conflicting comment: “We have a right to our bottom line first.”

It seems everyone in poker is only interested in the bottom line.

Except that little elf Luckychewy of course.

It wasn’t only Pahuja who had a contradictory axe to grind this week.

Mike Sexton is one of the most well respected people in the community. When the Poker Hall of Famer speaks, people listen. And they should. His blog posts are few and far between, but when he lets rips, it’s fun.

This week he poked the World Series of Poker (WSOP).

“They are attempting to strengthen their bottom line, but in doing so, are diluting their product.” Sexton wrote referring to the volume of WSOP events, and the decision to create the Nov Nine.

Sexton has been the lead commentator for the WPT for the past 13-seasons. A tour that started with 11 events, nine of which were based on American soil, one event in Costa Rica, and a trip to Paris, and has since turned into a global monster with events all over the world.

So what’s the difference between the two?

Has the growth of the WPT diluted the value of a WPT Main Event title?

Try saying that to Anthony Zinno.

He has just won his third WPT Main Event title in less than 18-months, after victory at the LA Poker Classic. A victory that came less than a fortnight after being successful at Fallsview.

He becomes only the third player to win three titles – alongside Gus Hansen, and Carlos Mortensen – and is the favorite to become the next WPT Player of the Year.

Zinno overcame a final table that included Mike Leah, Chris Klodnicki and Igor Yaroshevsky to take the $1m first prize. He now has over $2.8m in live tournament earnings.

Now that’s what you call a heater.

Last week I waxed lyrical about the success of the inaugural Global Poker Index (GPI) American Poker Conference (APC) and American Poker Awards (APA), and in less than a fortnights time, Alex Dreyfus and his band of merry humans will be doing it all again.

The nominations for the 14th Annual European Poker Awards have been announced, and it’s Dominik Panka and Remko Rinkema who are starring in more categories than anyone else.

The awards ceremony will follow the European Poker Conference.

The announcement of the awards didn’t please everyone. Former EPA Online Poker Player of the Year winner, Andreas Torbergsen, wanted to know why there wasn’t a single category awarding online poker play.

It was a fair point.

Alex Dreyfus responded with some valid points of his own – lack of data, segregated player pools, player anonymity – but they agreed to a compromise. The 2016 GPI EPA’s will have some form of recognition for online play. Another tick in the social media communication box.

Doyle Brunson is Back Playing Poker One Week After Cancer Surgery

Doyle Brunson has shown people that there is a heart of a lion underneath that fragile frame of his.

The 10-time WSOP champ underwent his 12th major surgical operation when he had a melanoma removed from his head. Fingers were crossed, prayers were made, and Brunson emerged with nothing more than a lot of holes in his head.

His sense of humor was not affected.

“Found out this big incision on my head is where Real Kid Poker paid the Doc to try and extract some poker knowledge from my head.” He tweeted.

After resting for a week, the Stetson was back on and Brunson was back winning money at the tables.