Calling the Clock: Acronym Time With News From the BPA’s, ACF, PPA and the CPAC

Put the kettle on, break open those hob nobs, and settle down for a week of poker news covering the British Poker Awards, closure of French poker clubs, fights to legalize online poker in the U.S, talk of cheats, and a young man from the Bronx who is smashing it.

We start our round up at the British Poker Awards (BPA). Victoria Coren-Mitchell was the biggest winner. She was nominated for three awards. She picked up all three. 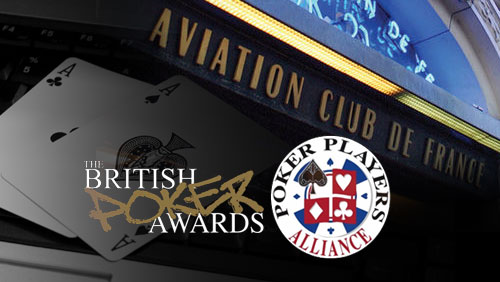 “If anyone asks I am wearing TKMaxx.” She tweeted with glee.

Her victories in the categories of Best Social Media User, Personality of the Year and Performance of the Year, means she has now won a total of six awards in the past five years. That ties with Sam Trickett as the most successful BPA winner of all time.

Trickett wasn’t nominated for a single award in 2014 – the first time that has ever happened. So what did he do whilst everyone else was enjoying a free glass of Ranking Hero flavored champagne?

Don’t sweat it though.

Trickett was unhurt, and has more than enough shillings to pay for the damage.

The BPA’s other stars were Dusk till Dawn (DTD) and Simon Deadman. The Nottingham card room picked up their annual award for Best Card Room, their owner Rob Yong picked up a much deserved award for Growth and Contribution to Poker, and the WPT500 event they held in conjunction with the World Poker Tour (WPT) and partypoker won the Best Live Tournament award.

Simon Deadman, who learned his trade in that very card room, walked away with the awards for Breakout Player of the Year and Best Live Tournament Player.

Whilst one card room celebrates, another one weeps.

Six months after being raided by French police, the iconic Aviation Club de France (ACF) has been placed into judicial liquidation by The Tribunal de Grande Instance in Paris.

The closure marks the end of a 100-year existence. 213 people have lost their jobs. Finding a place to play poker in France is like finding Andrew Lichtenberger in McDonalds.

Andrew Lichtenberger is not in McDonalds

When Andrew Lichtenberger speaks, people listen. So it’s great news to hear that the recent WPT Alpha8 winner has decided to join the Poker Players Alliance (PPA) in their fight to legalize online poker in the not so United States of America.

Lichtenberger met with PPA Marketing Director Drew Lesofski, and will be attending the Conservative Political Action Committee (CPAC), where he will be connecting with the right people, and voicing the right opinion about the game we all love {sometimes}.

He has also hooked up with Avi Rubin, an expert in systems and network security, who believes he has the right ideas when it comes to creating a safe and secure online poker network in the U.S. You know the type. The ones that stop little children from spending all their parents money, and terrorists from laundering money in order to make more bombs.

Nolan Dalla believes The Restoration of Americas Wire Act (RAWA) will pass into law. He believes that one of the reasons this will happen is poker doesn’t have a figurehead.

Is Lichtenberger our figurehead?

Let’s hope that the politicians and political groups that Luckychewy mixes spit with at the CPAC haven’t read any of Daniel Negreanu’s recent blogs.

“Tell me Luckychewy, who is this Russ Hamilton fellow? God mode? What is that exactly?”

Negreanu took to his blog to throw a question out there.

“Should the WSOP ban cheats?”

He then went on to talk in depth about some of the star names in the world of cloak and dagger. Russ Hamilton, Mansour Matloubi, Chris Ferguson, Annie Duke, Howard Lederer and Jeffrey Pollak were singled out as potential cheats, with only Hamilton and Matloubi on his definite NO GO list.

It’s because of the shadiness of online poker that U.S. citizens aren’t allowed to partake in a game or 24-tables. That is, unless, you live in the states of Delaware, Nevada or New Jersey.

There’s only one problem with that.

The action is virtually non-existent.

To alleviate that problem there is a legal loophole that allows states to share poker player liquidity. So far New Jersey has decided to keep their powder dry, but Nevada and Delaware have decided to share their toys.

That was a year ago.

Nevada Gov. Brian Sandoval recently told journalist Steve Tetreault that ‘technical glitches’ were the cause of the delay, and the new sharing scheme should be up and running in the next 4-6 weeks.

If you think the law is a little grey in the U.S then spare a thought for the companies trying to do business in India.

Not that any of that old nonsense bothers Adda52.

The quartet have the responsibility for promoting poker as a sport, both in India and the rest of the world. They will represent Adda52 both online and live.

Jose Montes Does the Business

I don’t even know what that means?

Now there is a different phrase that springs to mind when you think of the Bronx.

“Jose Montes does the business.”

The young man has just taken down the Heartland Poker Tour (HPT) Main Event at Black Hawk for $240,523 after defeating a field of 761 entrants. He beat the former World Poker Tour Player of the Year, Joe Serock, in heads-up action. Jacob Bazeley was also at the final table.

What makes this victory so remarkable is that Montes defeated 1,363 entries, just a few weeks ago, on his way to victory in the World Series of Poker Circuit (WSOPC) Main Event in Choctaw for $352,669.

The win puts him into the top 25 poker players in the world for money won in live tournaments during 2015.