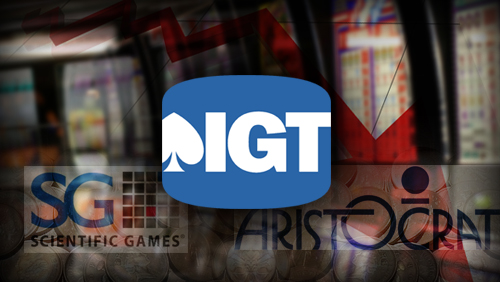 When it comes to the capital goods sector of the gambling industry – the gaming machine manufacturers – there are no clear winners. There are safer companies and more dangerous ones, but none in any sort of exceptional position. One thing that stands out about the capital goods sector of gaming is that, while most retailers – the big direct-to-consumer casinos themselves – have recovered spectacularly since the financial crisis, the machine manufacturers have not. At least not in terms of share price. International Game Technology (IGT) gets singled out sometimes for lagging in capital growth compared to direct-to-consumer casino companies, but that’s apples to oranges comparing two different strata of the gambling industry.

Scientific Games (SGMS), Aristocrat Leisure (ALL), and IGT are all way below their 2007 highs. The only game manufacturer that ended up surpassing its 2007 highs was Bally Technologies, which got acquired by Scientific.

Let’s take a look at three of them.

Aristocrat is in something of a weird situation. First, taking a look at the macro conditions and monetary picture in Australia, we see this.

money supply growth has been stable for a decade. You can almost draw a straight diagonal line from 2002 until now, so nothing too crazy there. However, take a look at the Aussie Dollar / US Dollar exchange rate and there’s definitely something strange going on in the Outback.

The AUD has weakened 20% in 6 months against the USD. This can’t be because of supply, since while the AUD supply certainly is not stable (it keeps growing at a close to constant rate), it is a lot more stable than the supply of other currencies. This has to do with USD demand, which has skyrocketed in tandem with collapsing oil prices, the USD being for all intents and purposes an oil-backed currency, since oil can only be traded in US Dollars. The conclusion being that the current fall in the Aussie Dollar since September is artificial and entirely related to oil. See for yourself below, comparing the oil price with the AUD/USD ratio.

What this means for Aristocrat, given that almost half of its revenue comes from North America, is it will have a windfall in the coming quarters due to the falling Aussie dollar. A falling domestic currency means a temporary stimulus for exports, which is what Aristocrat’s North American revenue essentially is. This could make Aristocrat an attractive short term trade given current forex conditions, but it’s got nothing to do with company fundamentals.

Fundamentally, its revenue from Asia is shrinking due to problems in Macau, and the company’s recent acquisition of VGT has levered it up higher than the company is used to. None of its debt is protected and most of it is floating rate, exposing the company to serious risks going forward.

Technically, the stock is at 5 year highs, but if you’re looking for a trade, it will have a good next half-year or so and could jump another 10-20% in that time frame. When oil starts to climb again, the USD will fall, the AUD will rise back up, and Aristocrat’s exports to the US will shrink back down and so will the stock price.

Scientific Games (SGMS) Levered Through the Roof and Losing Money

Scientific Games has never been a good company as far as I’m concerned. Bottom line, it has lost close to half a billion dollars since inception. To list the problem with this company:

In most cases there is at least something positive to say about a company, but I’m hard-pressed to find one here. Bally should have stayed independent. It was doing well, and now it’s attached itself to a company drowning in debt and unable to claw out a profitable quarter.

There’s nothing to oooh and aaah about with IGT, but at least it’s a profitable company that doesn’t go into major debt when making an acquisition. Debt to equity is 44% and falling, business looks stable and despite its debt being unprotected, IGT’s business model leaves it naturally hedged. As interest rates go higher, jackpot costs decrease and gross profit increases because cost of revenue (which includes jackpot costs) goes down. IGT estimates that a 100 basis point increase would have cost it 13.9M in 2014 and $17M in 2013. So if they end up paying more in debt service, which is low anyway at 44% market cap, they make more than that up in gross profit increases. IGT estimates that an identical 100 bps increase in interest rates would have only cost the company $2.6M in 2014. That’s a positive spread of $11.9M, so its debt is well protected without having to spend anything on derivative contracts.

To some extent this is the case with any slot machine manufacturer, but only IGT has made the numbers explicit in its filings.

IGT has proven that it can take a revenue hit and still remain profitable. We should expect that to continue. A dividend yield of 2.6% isn’t spectacular, but it certainly beats zero. IGT is a good defensive stock that will keep paying out even if it has a bad quarter or two. In terms of capital growth there are better picks out there, but IGT is certainly safe for the long term.