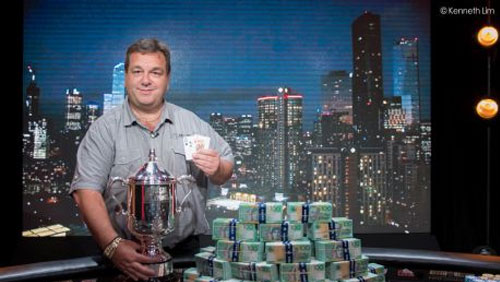 Melbourne was the home of two great competitions today: the Australian Open tennis final, and the 2015 Aussie Millions Main Event. One event saw an established favorite take the top honors, and another saw an underdog do the same.

Whilst Novak Djokovic was racking up his fifth Australian Open title, after victory over the Brit Andy Murray; Manny Stavropoulos was earning the first title of his career with victory over Lennart Uphoff.

It was a stunning victory for Stavropoulos. The mug shot of the final seven players contained a lot of unusual faces. Brian Rast and Richard Lyndaker the two that would seem familiar to most.

Rast was the star of the show. With over $7.6m in live tournament earnings, including close to a million in Dec 2014 alone – after great performances in the World Poker Tour (WPT) Alpha8 and the Aria High Roller. Lyndaker was a former Heartland Poker Tour (HPT) Main Event winner, and multiple World Series of Poker (WSOP) final tablist.

Stars fade out, eventually, and Rast’s light was extinguished in fifth place courtesy of the young German Uphoff. Rast failing to find his flush draw against the might of the over pair. He’ll be happy with his performance though. He banks another decent six-figure sum, and it’s his first Aussie Millions score. Lyndaker also had a disappointing day running aces into Uphoff’s flopped set of sixes to feel the axe in seventh.

Uphoff had some serious momentum and would ride it all the way to heads-up action against Stavropoulos. He began heads-up play with a 2:1 chip lead but after Stavropoulos turned that into a chip lead of his own, the pair agreed a deal that saw them splitting the money with $100,000 to play for.

The final hand was a bit of a cooler. Both players hitting a straight on [Ad] [9s] [8d] [7h] [8h] board, and the Australian’s [Jd] [Ts] was superior to the [Td] [6d] of the German. The Main Event title stayed in Australia, and we had our second German runner-up in a matter of days, after Ole Schemion did likewise in the $100k Challenge.