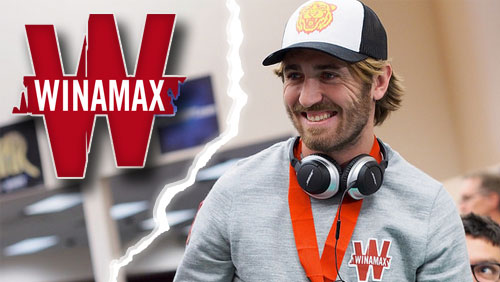 Ludovic Lacay is the latest member of Team Winamax to move to pastures new, after it was announced on his blog that he would be leaving with immediate effect to focus on something ‘scary and exciting.’

When I think about Ludovic Lacay I think about those brown headphones. I could easily identify him in the throng because he was the only one who owned a pair.

That was Lacay. He was always different. Making moves that others wouldn’t. Dressed like a rock star. Muttering words that nobody understood. Smiling one minute and throwing his cards the next.

He always stood up and shook my hand when I waltzed past his table. He once promised a member of the media 1% of his action, at a major tournament that has been lost in the recess of my mind, just for charging his phone. He ended up cashing for a six-figure score. He was a man of his word. He handed over the cash to the lad.

So it’s sad that I read, in broken English, that Lacay has decided to leave Team Winamax. He’s the latest spirit to leave the group in recent times after Nicolas Levi left to take up Ranking Hero charge, and Manuel Bevand left to also discover a new challenge. It must be something they put into the Winamax tea, because I loved those two old boys as well.

Lacay was picked up by Winamax shortly after finishing as runner-up in the World Poker Tour (WPT) Spanish Championships in Barcelona. Those were the days when the European WPT legs were €10k events and top players like Gus Hansen, Erik Seidel and Steve Billirakis were cashing.

In those proceeding years, and with the guidance of the Winamax team, Lacay reached the dizzy heights of number six in the all-time French live tournament money list, with over $3.2m in earnings, and a European Poker Tour (EPT) Main Event title to boot.

“I have some regrets of course,” Lacay wrote on his final blog post, “I’ll never be world champion.”

Of course, the use of the word ‘never’ could be a byproduct of Google Translate screwing things up. Let’s hope that’s the case, because if Lacay does intend to stay away from poker for a prolonged period of time, then he will be sorely missed.

Motivation may not be with him right now, but if anyone can find the winding handle that can regenerate large doses of the stuff, it’s the brown leather jacket wearing, handsomely stubbled Frenchman with a great taste in a quality set of cans.