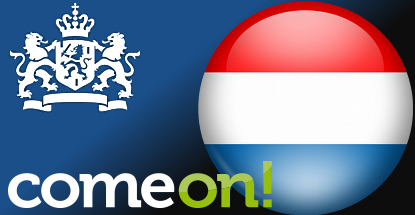 UPDATED WITH OPERATOR COMMENTS AT THE BOTTOM OF THE ARTICLE

The Netherlands gaming regulator has slapped Malta-licensed online gambling operator ComeOn Europe with a €180k fine for illegally serving Dutch punters. The fine is the latest in a series of six-figure fines the Kansspelautoriteit (Dutch Gaming Authority, or KSA) has levied against unauthorized operators as the country prepares to launch its own regulated online gambling market.

The KSA accused ComeOn Europe Ltd. (now CO-Gaming Limited) of targeting Dutch gamblers via Comeon.com. The site featured a Dutch language option, a Dutch flag and a Dutch-language chat service. The KSA says it repeatedly contacted ComeOn reps with various cease-and-desist messages, to which ComeOn reportedly replied by promising to amend its errant ways. However, the KSA says that the site was never updated to its satisfaction, leaving it no option but to levy the fine.

The KSA has also put eight associated companies and eight directors and shareholders of ComeOn on notice that they appear to be “more or less” involved in the unauthorized activity. The KSA cautions that their investigation is ongoing, so it does not at this time feel comfortable labeling the individuals as offenders.

Over the past year, the KSA has levied similar fines against the operators of 7Red.com, RoyaalCasino.com, Mansion Online Casino Ltd. and associated support companies. Most recently, Titanbet.com operator Imperial E-Club was dinged for €200k, the largest fine to date. The KSA even went after a Belgian couple for offering an online house lottery in which Dutch was a language option.

Netherlands’ legislators are in the process of passing the country’s new Remote Gambling Bill, which was supposed to take effect on Jan. 1 but has run into the traditional legislative snags. The latest word is that the upper house may bring the bill up for a vote before its summer break, making it more likely that the new regime won’t take effect until early 2016.

Notwithstanding, the KSA continues to ink info-sharing deals with its counterparts in other gaming jurisdictions. In November, the KSA inked a deal with gaming regulators in Malta and the KSA has since signed a letter of intent with the Alderney Gambling Control Commission. The letter is the prelude to a memorandum of understanding that will spell out the details of cooperation on a number of online gambling issues, including licensing, compliance and enforcement.

UPDATE: CO-Gaming Limited (the former Come On Europe) told CalvinAyre.com that it intends to pay the fine, but the company was “surprised” to have been levied a fine, “as we thought we had a dialogue with the authority, and that we followed their guidelines.” As such, CO-Gaming says it will appeal the KSA’s decision.

CO-Gaming says it believed it had “acted compliant” according to its interpretation of the KSA’s guidelines and instruction. CO-Gaming questioned why the KSA hadn’t followed up with “a simple email/letter.” CO-Gaming “feel victimized” by the KSA’s actions as CO-Gaming had “shown good will from the very first contact and would never jeopardize our long-term outlook of being a licensed Dutch operator by intentionally being in breach” of the KSA’s guidelines.