You know how everybody’s pre-occupied with all the Super Bowl odds – standard and props – coming out these days? You can’t really blame the betting frenzy because, you know, it’s the freakin’ Super Bowl! But lost in the shadows of the justified hoopla surrounding the Super Bowl is another interesting prop bet that’s slowly gaining some steam.

The US presidential elections, or to be more specific, the 2016 Republican Party presidential nomination. We already know who’s likely to come out of the Democratic Party – that would be Hillary Clinton – but the same can’t be said for the 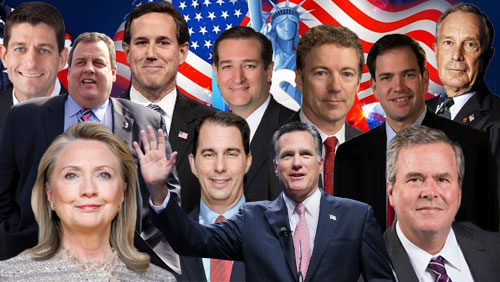 Republicans, which actually held a summit last weekend in Iowa to prepare for the Iowa caucus next year.

The list of names still in the running is long but there appears to be a clear favorite at this point. That would be former Florida Governor Jeb Bush, the second son of former president George H.W. Bush and the younger brother of former president George W. Bush. Right now, Bush is leading the way with Sportsbook.ag posting him as the 3/1 favorite to win the Republican nomination.

Nipping at Bush’s heel is former Massachusetts Governor Mitt Romney at 5/1 odds. This is the third time Romney’s voiced his interest in running for the highest seat in the land. Back in 2008, he narrowly lost the Republican nomination to eventual party candidate John McCain.

Romney finally got his desire to run for president in 2012 but he still lost out on the chance after Barack Obama secured a second term as US president. Is Romney’s third time in the seat the charm? He’s going to have to make a lot up to Bush, but he could put up a fight since the Republic nomination is so open.

If you’re looking at longer odds, Florida Senator Marco Rubio and Wisconsin governor Scott Walker are both sitting at 5/1 odds. Up next is a man we’re all familiar with: New Jersey governor Chris Christie, who shares 7/1 odds with Kentucky senator Rand Paul.