Home / Poker / Calling the Clock: Woods in Jail, Schwartz Setting Records and an Aussie Millions Round Up 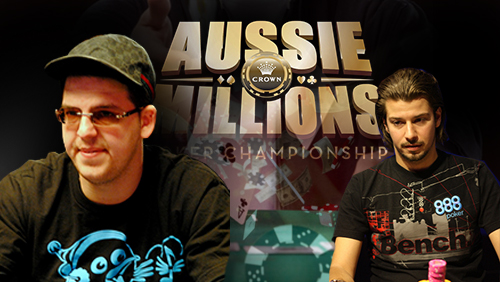 Lee Davy recaps the week’s headlines including a jail sentence for a British World Series of Poker bracelet winner, the end of Bluff magazine print edition, the closure of The Linq poker room, and a round-up of the action at the World Poker Tour, World Series of Poker Circuit and the 2015 Aussie Millions.

The week started out with news that the former 888Poker sponsored pro, PokerStrategy coach, and World Series of Poker (WSOP) bracelet holder, Darren Woods, was sentenced to 15-months imprisonment, and told to return £1m to those he had wronged, or else his sentence would be extended to one of six years.

The young man from the UK was said to have a net worth far exceeding £1m, giving you an understanding of the amount of money he was able to draw from the online poker industry, during his multi-accounting and fraudulent affiliate activities.

Woods has already been ordered to return £287,673 to an unnamed online gambling company. An amount believed to be on its way to the players he duped in due course.

Young Woods will have plenty of time to read whilst doing porridge, but one piece of literature he won’t be getting his hands on is a copy of Bluff magazine.

Earlier this week, Bluff Media, declared that the print version of their February issue would be their last. The dawn of the new age was upon them, and future issues of Bluff would be available in a digital only format.

It’s not all bad news though. Dentists and Doctors surgeries around the world may be devoid of some reading material, but the Lords and Masters at Bluff towers have promised an even more fulfilling meal when you switch on your iPad.

Their cousins at Bluff Europe will be continuing print publications, and are not connected with the digital switch.

Another Las Vegas card room closed this week. The hotel made famous for having the largest carousel wheel in the world (they call it an observatory wheel don’t you know) – The Linq – has closed its poker room and therefore curtailed the common $1/1 No-Limit Texas Hold’em (NLHE) game (although if it really was that common one imagines it wouldn’t have closed.)

It’s the third poker room to be closed in that part of the Strip, and all three of them belonged to Caesars Entertainment. It’s also the 12th live poker room to close in Las Vegas since 2012.

WSOP.com Overtakes partypoker as the King of NJ Online Poker

According to the peeps at PokerFuse the Caesars Interactive owned WSOP.com is now the most popular online poker room, for cash game traffic, in the Garden State. It’s a title that was previously bestowed to partypoker, and the takeover comes days after WSOP agreed a segmented player pool share scheme with 888Poker.

News of the battle is good. New Jersey online poker revenue took a nosedive in November, before trending northwards in December. WSOP traffic levels have risen by 49% whilst 888Poker have seen a 75% rise in traffic.

PokerStars are rumored to be joining the fray in the next couple of months.

Now for a quick round up of player news and we’ll start with the record breaking Noah Schwartz. The Floridian topped a paltry field of six players to win the WPT Alpha8 title in Florida. He took home a little over half a million for his efforts, after beating Jake Schindler in heads-up action, and becomes the first player to win both WPT Main Event and WPT Alpha8 titles.

The WSOPC has moved out of the Choctaw Casino Resort in Oklahoma, and it signed off in style. The Season 11 stop had already set a record for the largest ever field size in WSOPC history (Event #3 welcomed 4,053 players), when the Main Event became the largest in Season 11.

Jose Montes was the lone survivor, from a field of 1,363 entrants, and took home the top prize of $352,669 after seeing off the heads-up challenge of previous gold ring winner Benjamin Keeline.

The Aussie Millions is in full swing, and there are three results to bring you up to speed on. Vic Spadavecchia won the opening event for a prize of $215,000. The Australian defeated the American Derek Wolters in heads-up in that one. The British player Daniel Rudd took the honors in the NLHE Shotclock Shootout event. Once again it was an American settling for a runner-up berth as Hiroaki Harada came up short; Oliver Gill won a teeny-tiny field in the 8-Game Mix, and Ryan Dodge beat Mikael Koistinen to take the gold ring in the opening Pot-Limit Omaha (PLO) event.