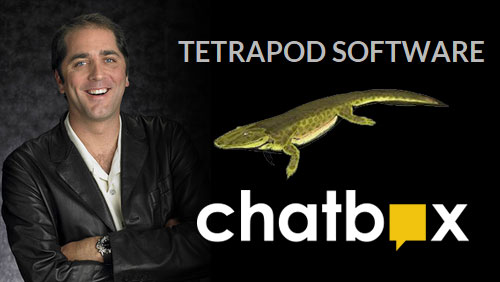 The former World Poker Tour Champion, Celebrity Poker Showdown commentator, and avid coloring book author, Phil Gordon, is back in the news after securing $2.35m in seed money for his new start-up: Tetrapod.

Phil Gordon is back in the headlines. No, he hasn’t written Phil Gordon’s Little Cyan Cornflower Blue Book: How Many More Pages Can We Squeeze Out of the First Successful Book Whilst Ripping People Off. Instead, he’s creating headlines after launching another start-up.

Chatbox is an instant messaging option that allows those who prefer their shit not to be spread around social media like a nut job decorating their padded cell, to have the option of opening up a quick and easy private chat forum.

The product is the first to be launched from Gordon’s new company: Tetrapod Software, his first public journey back into business after he shut down his mobile gaming company Jawfish Games following a proposed $20m acquisition that went a little Pete Tong.

“The remnants of the core team are together and onward and upward,” Gordon told TechFlash. “We shut down the company on Monday and on, I think, Thursday I secured the partnership of my co-founding engineers and we were going again.”

I have this vision of the whole thing going tits up and Gordon then organizes a game of Rock, Paper, Scissors to determine what to do next. I can’t help it. That’s the image I have in my head every time I think of Gordon.

He was quick out of the blocks. In 2014 he raised $2.35m of fresh seed funding for the new enterprise. According to GeekWire the money came from former Yahoo president Sue Decker, Paypal veteran Scott Banister; Gotham Capital principal Robert Goldstein; Rick Rudman of Vocus; Michael Bronfein of RemediRX; and Mattias Westman of Prosperity Capital.

Goldstein and Doug Miller (CRO of Living Social) are also joining the company’s board. Who gets the comfiest seat will be determined by a game of, yes you’ve guessed it – rock, paper, scissors.