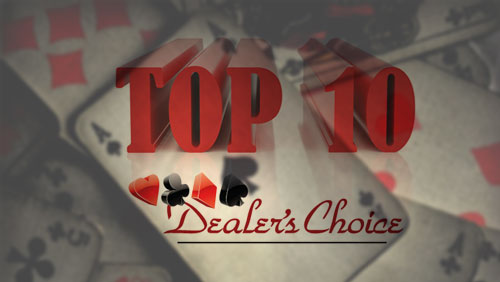 Every Friday I publish Dealers Choice, my take on some aspect of the wide-ranging world of poker. With Christmas coming up next week, this is a great time to look back at some of my favorites from throughout 2014. Here’s hoping you all have a happy holiday season and lots of good luck in your future.

The players whose funds were frozen at Full Tilt Poker when the U.S. government shut that site down in 2011 have finally begun seeing refunds, but their Full Tilt Point balances, a source of income for many high-volume players, were rendered worthless in the refund process. In this column, imagined what a few just rewards to spend those FTPs on might have looked like.

With cable TV more splintered than ever and online services like Netflix to compete with, poker on TV isn’t the cultural juggernaut it used to be. In consideration of all that competition, I came up with a few tongue-in-cheek ideas for how poker could grab people’s attention once again.

Poker and stand-up comedy don’t have a lot in common, as anybody who’s ever played with an unfunny extrovert can attest. But in both businesses you’re only as good as the sum total of your wit and determination. Stand-up comic Clayton Fletcher talked with me about being a success in both of these two disparate realms.

The WSOP and poker in general were built not just on big money, but also on a certain mystique. That’s fallen by the wayside as sponsorships have whitewashed the game personalities and social media and 24/7 coverage of the game’s minutia have made it so nobody can make a move without generating a hundred generic, optimized headlines.

George Danzer ended up winning the WSOP Player of the Year Award after the conclusion of WSOP Asia-Pacific, on the strength of three bracelet victories throughout the year. In June he won the first two of those in Las Vegas, jumping to the top of the POY leaderboard and catching some observers by surprise. Having covered many of his online successes myself in the past, I provided this introduction to the German’s background in the game.

In the earlier piece on George Danzer, I mentioned his assertion in 2013 that online tournament series are more difficult than live ones like the WSOP. After spending part of my summer covering a dozen events in an online series myself, I took a look at the evidence to test Danzer’s theory.

When the mainstream press picks up on a poker pro’s tweet about how much money he’s won, it’s a sure bet they’ll screw up the important task of providing the proper perspective. And why would they do anything else, when even people within poker itself have a hard time keeping the game’s massive inflation in perspective?

When Full Tilt Poker announced its latest promotion was a winner-take-all $50,000 heads-up match between two sponsored pros whose losses for the year were many times that amount, I lamented how the sponsorship model from the poker boom has lingered long past its sell-by date. Less than two months later both Viktor Blom and Gus Hansen were released from their relationships with the site, which currently sponsors no players.

The history of poker is littered with champions who were high as kites when they made their mark on the game. I took a look at some of the most notorious examples, along with a few other examples of drug use at the tables in years past.

As Delaware, Nevada, and New Jersey continue to post disappointing online poker revenue numbers, the game’s future in the United States is looking bleak. The one bright spot of hope is California, where a battle is shaping up to finally move legislation through after years of delay. Still, the nation’s largest potential market isn’t a guaranteed win for the online poker industry at large – the state still has lots of opportunity to make bad decisions that could kill the game’s potential in the U.S. for years to come.