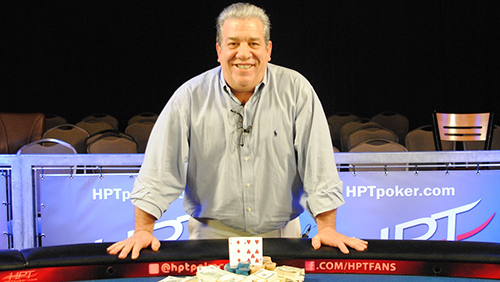 Mike Puccio defeats Bledar Shaholli, in heads-up action, to take the title and $164,249 first place prize at the Heartland Poker Tour Indiana-Ameristar, in the Ameristar Casino in East Chicago.

Mike Puccio has won the final Heartland Poker Tour (HPT) Main Event of 2014, after defeating Bledar Shaholli in heads-up action. The Deerfield, Illinois resident defeated 498 entrants, and took $164,249 from the total prize pool of $714,120, after a three hour heads-up battle against the business owner known as Blade.

It was the second time the HPT prize pool had exceeded $700,000, in the past two months, and the scent of money attracted the likes of the former World Series of Poker (WSOP) Main Event Champion, Greg ‘Fossilman’ Raymer, and HPT legend Craig Casino.

It was an interesting final table: Yaroob Kaskoris was making his second HPT final table appearance in the past two months. He finished ninth in Michigan, Mount Pleasant, and would see his second attempt fall short in eighth.

With 12 HPT cashes, and three final tables, under his belt, Ben Castle was without doubt the most experienced player at the final table. Castle falling in fifth place when his [Ah] [8h] could not beat the [Kc] [Qs] of Josh Turner in a straight up race. Turner, was another player with previous HPT final table experience, and he would finish in third after his ace high failed to overcome the [Kc] [Tc] of Shaholli, after a king appeared on the flop.

That exit gave Shaholli a 3:1 chip lead in the heads-up confrontation with Puccio, but he would fight back valiantly, eventually winning the title with the awkward looking [7h] [3d] – Shaholli getting it in with [Ad] [Qd], on a [7d] [4c] [3x] flop, and Puccio delightfully picking him off.

“It’s going to be a good Christmas this year, said Puccio.