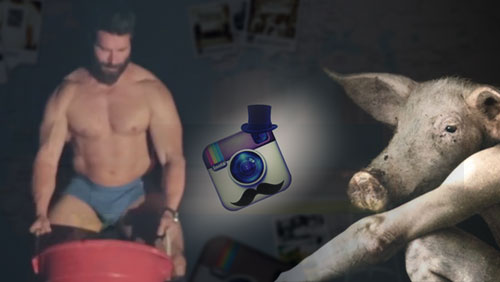 Lee Davy takes a look at the King of Instagram and ponders whether poker writers should be covering his antics in our work, and whether his multi-media exposure is a positive or negative thing for poker.

Only the people closest to Dan Bilzerian understand what type of man he is. For the rest of us we only have Facebook, Twitter and Instagram. At the time of writing Bilzerian has 1.4m Twitter followers, and 5.7m Instagram followers. We may not know who he is, but we sure as hell want to find out.

“I think the guy is genius and very opportunist, “says the Global Poker Index (GPI) CEO Alex Dreyfus. “He is famous for being famous – great move.”

“In all of my travels and dealings with big games around the world, for nearly a decade, I have never really seen any hard evidence that he plays poker like is suggested. Perhaps he is bluffing?” Says Warren Lush.

A wise woman once told me that when you are confused about such things always ask this question.

“Would you do it to your mother?”

I doubt Bilzerian would thrown his naked mother off a roof, or get her to clean his mansion in her suspenders. I assume he respects his mother, and has no respect for the women that are involved in his charade? Does this equal misogyny? Is it disrespectful to throw a woman off a roof if she wants to be thrown?

“His fame comes from society’s obsession with money, power and sex and he’s giving a birds eye view of those things because WE have asked for it,” says Ebony Kenney. “I think he’s just living his life, not only the way he wants to, but the way a lot of people would want to. So who cares? Let’s be worried about the Annie Dukes of the world giving TED talks, two plus two forum members bashing any non-GTO decision from fun players, and applying deodorant when leaving the computer screen behind to talk to someone IRL.”

Fortunately, Bilzerian helped me out this week by appearing to kick a woman in the face during his birthday bash in a Miami nightclub. That’s language that I do understand. My Dad raised me to never hit a woman. I have never done so. That is a complete lack of respect. You hit one; you might as well hit them all. I might not understand the meaning behind misogyny, but I do understand the meaning behind a size 10 to a woman’s face.

“He has mastered the new media landscape.” Says Warren Lush.

Grand Theft Auto V broke six sales world records when it was released in 2013. In many ways Bilzerian is a character from that game. As a Brit I fail to understand the obsession with guns, but am reliably informed by my American pedigree chums that people will actually be interested in the photos of Bilzerian’s arsenal.

The fact that he has been arrested on the belief that he is readying himself to make a bomb doesn’t surprise me. What type of world are we living in when that’s the case? I get more concerned over his desire to acquire more weapons than Kim Jong-un, than the arsenal of ass being thrust into my face. I remember Tony Montana liked to play with guns and look what happened to him.

“To be honest, even if the poker media do keep reporting on him I don’t think they will be able to do so for long because he’s either going to end up in prison or in a box in the very near future.” Says Matthew Pitt.

And if that happens, will poker lose anything? Should I even be writing this?

“Dan Bilzerian being classified as a professional poker player is like me being considered a nun – a far fetched tale if there ever was one.” Said Ebony Kenney.

My job is to seek out poker related news stories and give them a platform for readers to consume. I can’t remember why, or when, Dan Bilzerian became something ‘poker related’ to write about, but that seems to be the case. Poker writer Rob Strazynski has a good view as to why this has happened.

“He gets covered in poker because his fame derives from nothing. The media needs to associate him with SOMETHING, and Instagram isn’t enough. He was once seen at the World Series of Poker, and ESPN gave him some coverage. Then once in a while he plays for nosebleed stakes with money inherited from his father.”

We have become the foundation from whence this misogynistic, gun-toting, woman hurler has grown into the King of Instagram. If you are going to relate him to poker then he is one of only a handful of players who will grab the attention of the world’s mainstream media. Does poker benefit from this, or suffer?

“The fact that he is associated with poker is a stain on the game. The ONLY good that it brings is publicity to the game itself, but he’s proof positive that there IS such a thing as bad publicity.” Says Strazynski.

But is there a such a thing as bad publicity?

There are others who disagree.

“Getting the word ‘poker’ out is always good, and showing off his lavish lifestyle, supposedly paid for by poker is potentially interesting,” says Dreyfus. “However, it comes with risks, and poker doesn’t need another scandal. My conclusion is Bilzerian is good for social media; built his fame on values that I don’t respect, and is hiding the fact that the money he is spending comes from Daddy’s pockets. I don’t think he is a good asset for poker, because it doesn’t bring any values or any steady/strong recognition of the game.”

I think Dreyfus makes an excellent point. As individuals we cannot condone the way that Bilzerian behaves. Do we want our children to grow up into this? More importantly, we should unite our collective values as a poker community. We should not allow values of this kind to permeate our game. There are a lot of people doing so much good to promote our game, and Bilzerian’s association with it undoes that good work.

“He fits the prejudicial stereotype that I’d like poker to get away from. His brand of ostentatious chauvinism is something that I think the world needs to get away from. Thankfully, poker is full of thoughtful, insightful and progressive people whose reputation gets tarnished by stories like these. If we want poker to progress as a healthy, inclusive, thought-provoking game, we have to get away from this image.” Says Sam Holden.

However, not everyone agrees that the poker industry should shun Bilzerian.

“He should definitely be connected with poker,” says Adam Levy, “Part of being a poker player is developing connections, at the table and off, and he has excelled in that area. Ideally, you want to win the most money the easiest way and if he is scooping millions off Sheikhs then that sounds like he’s doing exactly that. I met him a long time ago and he used to play in a Florida 1-2 NL home game I frequented. He was known as “Action Dan” as he would buy in for unreal amounts and always brought a gun with him as “protection”. So as far as how he is now, yeah it’s a bit more exaggerated than it used to be, but he’s always been that same in your face guy.”

It’s quite amazing that sex, the most powerful of human desires, is driving this topic of conversation. Without the sex there are only guns and I end up having more followers than the man who loves goats. This desire for sexual expression is genetic. We are hard wired this way. It’s the way our species survives. So we cannot beat down this desire. Instead, it needs to be controlled. Unfortunately, for Bilzerian, the desire is very much controlling him.

Think and Grow Rich author Napoleon Hill investigated the lives of 500 of the most successful American men between 1908 – 1928. He was on a mission to find out what made these great minds tick. He found there were 13-steps to riches. 13 things that all of these great men of our times had in common.

No. 10 on this list was the power of sexual transmutation. He believed that the men of greatest achievement were men with highly developed sexual natures. They had a huge desire for the need for sexual expression, and a burning desire for fame, power, and financial gain. Henry Ford, Theodore Roosevelt, Thomas Edison, and Andrew Carnegie transmuted this sexual energy into a creative force that set them alight and made them legends of our time.

For Bilzerian the tale is very different. There is no creative outlet. It’s raging. It’s burning. And soon there may be nothing but ashes. One day I may ask my son if he knew Dan Bilzerian: The King of Instagram.

I hope he will say Dan who?