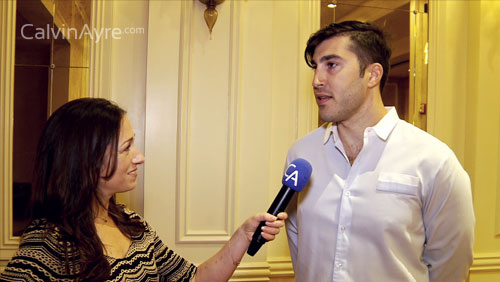 Becky Liggero talks to Chris McAlary of Coin Cloud. He shares how he made the transition from mining Bitcoin to actually launching a company that creates the ATMs.


Becky Liggero: I’m here with Chris McAlary; he is the co-founder of Coin Cloud. We are here in Las Vegas for Chris has a Bitcoin ATM that is on the Strip and you actually started out as online poker player and you make a transition from online poker to Bitcoin miner?

Chris McAlary: Good question. Basically, Black Friday. I left the bad taste in my mouth when the Department of Justice seize, froze basically my entire bank account, almost all my assets. I had learned about bitcoin six months before that so nobody can control my money if i have a private key so i’m gonna store all my wealth there and got into mining because wiring my personal information over to Japan seemed kinda shady and hassle so i was like, why don’t I build my own mining reg and was turned out to be on the top of the things I’ve done, technically in my life. But i was mining bitcoin at $2-$5 at the summer of 2011. Fortunately it worked out despite the $500 electricity i paid.

Becky Liggero: How did you make the transition from mining bitcoin to actually creating a company that creates ATMs?

Chris McAlary: Some of my best friends in Vegas got involved with Robocoin and they were just mini fracturing machine rather than operating. And I kinda said seems like they have leave a lot of money on the table why they aren’t operating these machine , turns out that there are considerable legal barriers to do that. You need to be a money service business, in in Federal government, you need to be a money transmitter on a state by state basis of 48 states or 50 states. So it took me 9 month of reading the law, doing all the works to get ready to go. Fortunately, my room mate in college is practicing lawyer here in Las Vegas and he actually quit to come on full time to be a chief compliance officer. So it was just solving the legal problems i saw preventing them from operating in every corner of the United States.

Becky Liggero: How are things going for bitcoin or Bodega, i believe that’s what it is called when it is here in the Strip. How is the traffic at the ATM?

Chris McAlary: It’s crazy. That location sees  a 100K plus, a 110K people per day. It’s great. It’s the number one ATM machine in the world according in the Robocoin statistics. We went to Vancouver, a couple of weeks ago and our 50th day of operation. There’s just ton of tourists who have never heard of bitcoin before walking by that location. It’s a great way for them get a hold of what’s bitcoin.

Becky Liggero: How do you think that Las Vegas can play a part in spreading bitcoin, spreading the community around?

Chris McAlary: Vegasis a very international city. People come here for commerce. People come here for vacation; they come here because they like to gamble. So people when they are here, it is the time they’re typically more open-minded than they would be in their normal lives back home. And so the ability to introduce bitcoin people in that situation and allow them to take it back to where they live is a great opportunity to spread bitcoin, the usage of bitcoin awareness.

Becky Liggero: Why do you think bitcoin can potentially become the currency of choice here in Las Vegas?

Chris McAlary: I think there’s always gonna be a need for competing currencies and i think bitcoin is gonnabe great in internet, would be great in a stored values and sort of a hidden asset. The dollar is great for other things like paying back debt, which is why the government is has set inflation and values it over the course of time. So there’s a need for both. It’s great for online gaming. And i would like to see casinos to adapt it more. It’s a great way for casinos to bring in offshore money like the currency capital control in China. i think is limited to $50,000 a year to withdraw and the Chinese are figuring it out. The words are getting out and if you are a Chinese citizen and you get money around the world, not using a bank, bitcoin is a perfect way to do that. Eventually casinos in  Las Vegas are going to figure it out and see how valuable bitcoin and start accepting every bitcoin ATM on the floor and just tap the money going to Macau or going to Sands Singapore, Cotai Strip. They are just scared to touch it right now.

Becky Liggero: Fantastic, Chris. It was quite an adventure you have there. Best of luck with it.