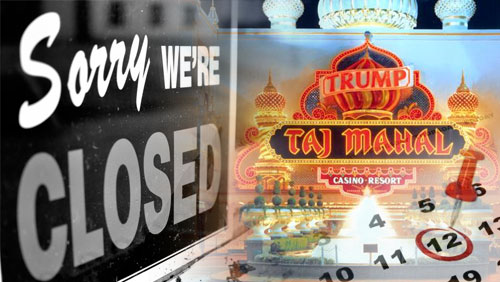 Trump Entertainment Resorts pushed through on its plans to close the Trump Taj Mahal, joining the four other gambling establishments that have shut down in Atlantic City this year. The company filed its papers in federal bankruptcy court on Friday after failing to secure state and local tax concessions it needed to keep the casino open.

Attorneys for Trump Entertainment advised New Jersey’s Division of Gaming Enforcement of its intention to cease operations of the Taj Mahal and to close it on or about Dec.12.

Once the Trump Taj Mahal closes, 3,000 of its employees will be out of jobs, joining roughly 8,000 more workers who have lost their jobs since the mass closures this year.

Atlantic City Mayor Don Guardian called it “a very difficult time” for the soon to be shuttered Trump Taj Mahal and its employees.

“I am very sorry to hear that the Trump Taj Mahal has decided to close on Dec. 12,” Atlantic City Mayor Don Guardian said in a statement. “I know this is a very difficult time for all the employees who will be losing their jobs. I want them to know that the city of Atlantic City did everything they could to help keep the Trump Taj Mahal open. However, they still must pay their fair of taxes, just like our residents do.”

Bob McDevitt, the president of Local 54 of the Unite-HERE casino workers union, was quick to blame billionaire investor Carl Icahn’s supposed “bullying tactics” as the straw that broke the Trump Taj Mahal’s back.

“We are all waiting for Mr. Icahn to step up and become part of the solution and stop pointing fingers, threatening and demanding,” McDevitt said. “For once maybe he could do the right thing instead of trying to bully everyone.”

Icahn, who promised to invest $100 million into the Trump Taj if the company received $175 million in state and local tax breaks, continues to throw his own shots to the Trump Taj Mahal’s union for taking advantage of the casino’s financial problems and not appreciating the fact that no one was willing to invest in it before he came along.

“Reprehensibly, the union, instead of working with and trying to help the company to keep the Taj alive, is instead doing everything to destroy the possibility of saving the jobs of over 3,000 employees,” Icahn said last month.