Confessions of a Poker Writer: The Swedish Superstar That Nobody Wants to Hire 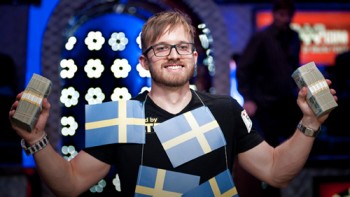 Lee Davy continues his confessions series with his view on the final table of the World Series of Poker Main Event, and in particular the winner, Martin Jacobson.

I woke up in an angry mood. Then I switched on my laptop and was met with the grin of a hairy looking Swede. Martin Jacobson had won the World Series of Poker (WSOP) Main Event.

I started to smile.

The first time I was amid the WSOP Main Event it was special. There is an indescribable buzz to the place during those first few starting days. The rail is packed; all of the stars come out to play. It’s the beating heart of poker.

Then as the tournament drags on, my interest wanes dramatically.

“Yorane Kerignard…I remember him wilting into a blubbering wreck when he won WPT Malta. Imagine what he would be like if he won this one?”

“Martin Jacobson or Craig McCorkell…I want one of those two to win it.”

After McCorkell’s ride ended in 13th place the only player that I had any sort of personal connection with was Jacobson. That and the fact that he is a complete poker boss, meant that he got my vote. I wanted Martin Jacobson to win the WSOP Main Event.

I am not ashamed to admit that beyond wanting Martin to win I had no interest in the event at all. The November Nine concept removes that sparkle for me. It shoots the world’s most prestigious tournament in the heart. It becomes no less exciting than the winner of some obscure event in the Outer Hebrides. It’s just an event that I need to write about once a winner has been crowned.

I reached out to all nine of the final table participants seeking interviews and only two returned the call. One of them was the chip leader Jorryt van Hoof, and the other was Martin.

The new WSOP Main Event champion is a very introverted person when you get him in a one on one interview situation; the complete opposite to his demeanor when he is playing heads-up in the biggest events in the world.

He doesn’t like to talk about himself. It makes him feel awkward. We will now see Martin playing in more High Roller events, but apart from that I don’t think this win will change him whatsoever.

He is one of those kids that you grow up wishing you were him. He has the chiseled cheekbone look that the girls die for, he’s able to grow facial hair, he has biceps, and when he wakes up in the morning he doesn’t even brush his hair and he looks cool.

He is also very successful.

This victory is his first major title since he exchanged the frying pan and apron for poker seven years ago, but that doesn’t tell the whole story. Like The Beatles, Martin Jacobson has just arrived in America. The largest contingent of poker players in the world now knows who he is. But the Europeans always knew who he was.

Jacobson is one of the most consistent performers on the European Poker Tour (EPT), a series that many of poker’s princes and princesses believe is the greatest, and most difficult, tour stop on the planet. He has amassed 26 EPT cashes, including five final tables with two runner-up finishes, and over $5m in cash.

In 2012, I wrote an article asking the world of poker what on earth this man had to do in order to gain a sponsorship deal. He didn’t just fit the mould; the mould was created around people like Jacobson. The kid had everything and yet the main sponsors continued to ignore him.

Even when he reached the final table that attracts more eyeballs than any other, the online poker rooms still failed to spot the value in a man I believe will turn out to be one of the greatest in the game.

That 2012 article carried the title “For Sale: Martin Jacobson!” and the only thing that I said was missing from his CV was a major title victory.

Nobody ever took that sign down, and he has just taken down the biggest tournament in the world.

It’s just unfortunate for him that PokerStars don’t seem to have a job vacancy.

Well…look on the bright side…at least he has $10 million reasons to continue on his own.