Home / Poker / Antoan Katsarov Triumphs at the Battle of Malta 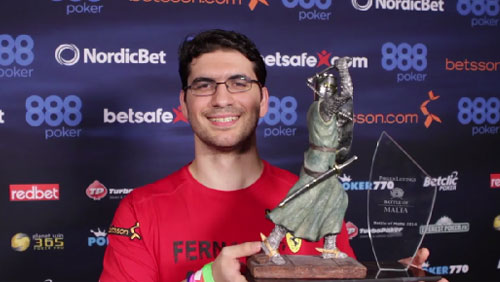 Bulgarian Antoan Katsarov triumphs at the PokerListings Battle of Malta, after defeating the local boy, Alan Brincat, in heads-up action, to take the first prize of €122,750.

Antoan Katsarov is the man holding the PokerListings Battle of Malta trophy in one of the most peculiar endings to a tournament you are ever going to see.

With a field size that even surpassed the expectations of the organizers, and with 35-players still in contention for the title on the final day of action, the players decided to play down to the 5am casino cut off point, where the winner would be the person with the most chips remaining.

The action did indeed hit that 5am mark and when it did, the Bulgarian Antoan Katsarov held more chips that his heads-up opponent Alan Brincat, and he was therefore deemed the Battle of Malta champion.

It was the third time that PokerListings had held The Battle of Malta, and with online qualifiers siphoned through the likes of 888 Poker, Betsafe, Betsson, NordicBet, Poker770, PlanetWin365, Everest Poker, Redbet, TurboPoker and Betclic, the turn out was huge.

The €550 buy-in event carried a €500,000 Guaranteed Prize Pool, but that was smashed as 1,447 entrants created a total prize pool of €701,795, breaking PokerListings own record for the largest poker tournament ever held on the tiny Mediterranean island.

The Heartland Poker Tour (HPT) commentator, Maria Ho, was drafted in to host the event, and speaking to her after his win, Katsarov said that the win felt great, and he was going to use the money to “play higher stakes Sit & Go tournaments, and be one of the best.”

The victory was only Katsarov’s second live tournament cash, and he maintains his 100% pristine record after following up on his solitary victory at a £450 buy-in event at Aspers Casino in Stratford, UK.