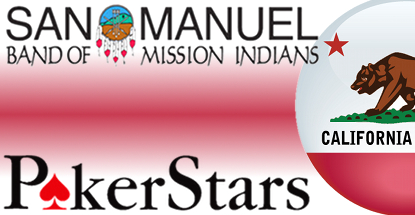 PokerStars inked its Morongo deal in April, prompting a coalition of 13 other prominent tribes – which included the San Manuel Band – to draft an online poker bill that specifically prohibited the participation of PokerStars and any other poker site that continued to serve state residents following the 2006 passage of the Unlawful Internet Gambling Enforcement Act (UIGEA). The Morongo-led group insisted that such decisions were best left to regulators, not legislators, and vowed a legal challenge of any bill that contained such exclusions. The schism contributed to the August death of legislative efforts to legalize intrastate online poker play.

In a statement, San Manuel chairwoman Lynn Valbuena said the band was “pleased to join this collation” and was “convinced that the various interests must work together if we are to be successful” in bringing legal online poker to California. Morongo chairman Robert Martin said the San Manuel Band addition marked “a new day” in the online poker push and that “as tribes come together on this issue, the opportunity for success grows.”

The defection of the San Manuel Band to the PokerStars camp will offer hope to Stars fans but opposition remains fierce. Two weeks ago, Pechanga Band of Luiseno Indians chairman Mark Macarro reiterated his group’s staunch opposition to Stars’ participation in California, telling iGaming Business that Amaya’s purchase of Stars earlier this year had done “nothing” to change his position.

California’s state legislature officially reconvenes in January, but Macarro expects online poker legislation would be put onto the agenda as early as December. Reggie Jones-Sawyer is expected to lead the charge in the Assembly, while the retirement of state Sen. Lou Correa has left an opening for a new online poker white knight to emerge in the Senate. Macarro suggested the primary sticking points remain the ‘bad actor’ issue, the ability of state racetracks to participate in the online poker market along with various other regulatory issues.