The third and final day of EiG 2014 has come to a close. Traditionally the last day of EiG is quietest but also the shortest and this year was no different.

Delegates on the floor today were mainly EiG Start-Up Launch Pad attendees and exhibitors, although we noticed a collection of un-manned booths towards the end of the day, likely due to excessive festivities at the previous evening’s official conference party at Pearl nightclub.

Bet Trade was there in full force today, however and we spoke with Founder and Director George Georgiopoulos to learn more about his No-House Casino product.

First off, the appeal of a no-house casino concept vs. the traditional casino concept is the more social feel and 100% payout for players- each player has exactly a 50% chance of winning. Multiple bets are matched to eliminate the house, a concept similar to what Betfair has done with sportsbetting.

There is also a “live trading” element for players, a feature that allows them to trade before the winner is announced. An example of this feature in action is when the slots pause with two wheels still spinning and players can decide if they want to cash out early. This feature is also responsible for Bet Trade’s revenue stream, rather than through commission on player bets.

According to Bet Trade, their no-house product is more social and engaging for players and it increases margins whilereducing risk for operators. Looking into the future, Bet Trade envisions adding on to the no-house casino concept, allowing players to bet on virtually anything – fantasy sports, lottery, new types of games and more.

The EiG Start-up Launch Pad, now in its ninth year, was today’s highlight and arguably the highlight of the entire conference.

Over the course of two hours, five start-up companies pitched their product to a panel of judges including Mark Blandford of Burlywood Capital, Evan Hoff of Velo Partners, Ian Hogg of GamCrowd and Hillary Stewart-Jones of DLA Piper. Melissa Blau served as the moderator of the session and also played a key role in choosing the five companies to make the shortlist. Those five companies were:

Asylum Labs: A mobile game studio that “puts the social in social casino”. Wild Party Bingo is their flagship product, currently offering free-to-play with real money coming in the near future.

Betify: A free iOS mobile app allowing users to challenge or get challenged by their friends on the go. When users win challenges, they build their reputationand earn rewards such as discounts or products offered by Betify’s partners. 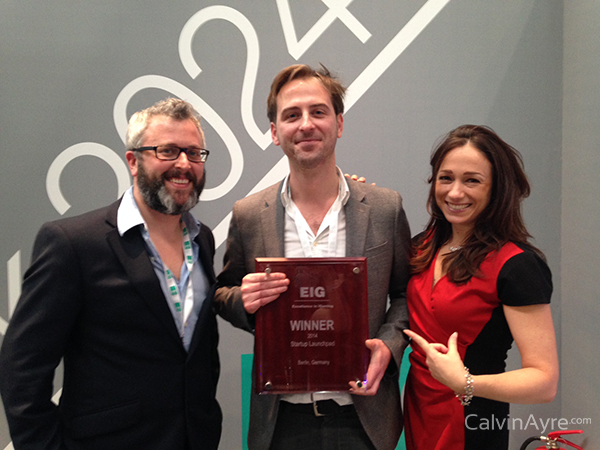 After delivering their pitches, the panel of judges fired questions at each presenter in front of a room full of online gambling professionals. At the conclusion of the pitches the audience had the opportunity to vote on which company they would invest in and the winner this year was Fresh8.

Looking back over the past three days, its obvious that Clarion put a big effort into making changes to EiG from years previous.

Kate Chambers explained that Berlin was chosen as this year’s host city due to delegate feedback, its technology industry and its cold weather (this way delegates are not tempted to ditch the conference).

She emphasized that the theme this year was freedom and therefore the expo floor was built as an open plan to inspire thinking, networking, new ideas and innovation.

Speakers from outside iGaming were invited this year to share their ideas and experiences, providing a new perspective to delegates and an opportunity to think in a new way.