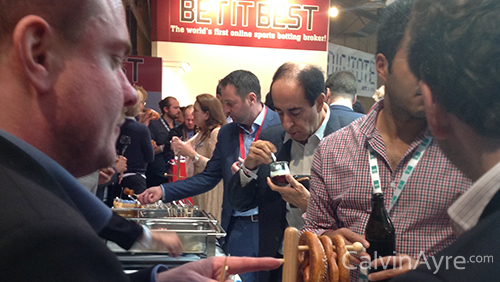 The second day of EiG 2014 was busy and buzzing, with delegates sticking around the expo hall for post-conference drinks at the Microgaming bar and a Bavarian spread at the Wirecard booth. Tonight delegates are excited for the official EiG party sponsored by Safecharge, an evening promising free drinks for the group from 21:00 at one of Berlin’s hottest nightspots.

EiG’s vibe this year feels of freedom, change and discovery with plenty of open space on the expo floor, open plan session rooms, a focus on innovation and a spotlight on start-up companies.From our perspective, it is refreshing to see smaller companies showing off their new products in an environment that traditionally spotlighted the industry giants and household brand names.

Jacky Media is one of those start-ups, a Berlin based company that has created a white label mobile affiliate program solution, also anexhibitor on display withinEiG’s Start Up Zone.Jacky Media’s technology provides mobile operators with a fully functional affiliate program back end, custom creative and a solid tracking system ensuring players coming to an operator’s app from an affiliate’s app are tagged as such. The feedback at EiG has been positive for Jacky Media, especially seeing as mobile gambling is such a big topic in 2014 for the entire online gambling industry.

A few booths down, Asylum Labs had their social bingo product on display, Wild Party Bingo, touting a tagline of “The world’s most social bingo game”. Once we sat down for a demo, it was clear that Asylum Labs have actually have achieved what they claim by creating “social 2.0” features the industry has not seen before. Wild Party Bingo’s features inspire “rich community interactions” such as joining a friend’s bingo game, forming teams, “thanking” teammates for doing a good job plus additional features in the form of bonus rounds, the ability to take coffee breaks and literally so much more.

Over at today’s sessions, Don Daglow of Daglow Entertainment and over three decades of experience in the video games industry delivered his presentation. “Innovate for yourself or someone else will innovate for you”, he told the audience. Daglow also shared that people play games to inspire different emotions and used movie choices as an example- we go to see a comedy one day and a dark drama another. “What emotion are they seeking when they play the game”? Feed those emotions, he advised.

Daglow left the audience with a few nuggets of wisdom, the first being that nostalgia is a powerful human emotion and that the iGaming industry should make an effort to harness this emotion through its games. His biggest piece of advice for the online gambling industry based on his video game industry experience was to avoid predicting the future as things are often not what we expect them to be.

Another one of today’s “outside in” speakers featured Chris Searle, now a consultant and formerly in charge of Corporate and Social Responsibility for Bacardi. His experience in the drinks industry spans thirty-seven years and Searle is an expert in how to manage an industry’s public image. Searle shared that the key to building and maintaining a positive public image, especially with complex, global and fragmented industries such as alcohol and online gambling, is by developing one, unified voice. “Activists love to attack divided industries”, he said.

Searle also advised that an industry’s perception is not always a reality and it’s a good idea to take an independent check and audit on how your industry is doing in terms of perception. “Consumers are suspect about company motives”, he warned. When asked, Searle predictably supported the The American Gaming Association’s efforts to expose research supporting Americans are in favour of gambling and that crime has been decreased in areas with casinos.

The highly anticipated EiG Launch Pad takes place tomorrow, a one-hour session featuring the pitches of five start-up companies to a panel of judges. This year’s roster of start-ups include Asylum Labs, Betify, DiscountIF, Fresh8 Gaming and Lucky VR, all companies that had to go through a rigorous process to make the shortlist.

EiG Launch Pad judge Evan Hoff of Velo Partners has years of experience in the online gambling industry and when asked what he will be looking for in these start-up companies tomorrow, his response was “The Founder”. Hoff is a big believer in using a Founder’s idea, drive and passion as a gauge for how successful a company has the potential to become, so to those five founders on stage tomorrow, all we can say is no pressureand good luck!