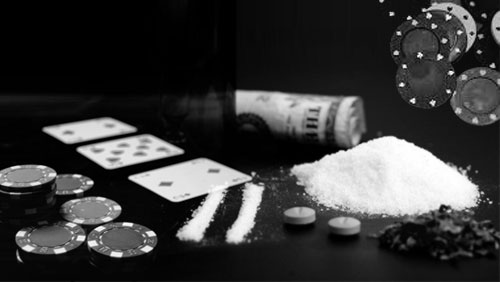 As long as there’s been poker, there have been drugs around poker. Nobody knows what kind of drugs the players were taking on the riverboats where the game became prominent in the 19th century, but we do know that Americans have always loved booze. For the card sharps who made their living cheating marks in high-stakes poker games on the boats, it certainly could help to ply a potential target with strong drink. The games in casinos today may be honest, but cocktail waitresses are ever-present.

Tournament poker was born at the WSOP, and at least one of its founding players was known for his penchant for a good time of all kinds. Sailor Roberts was so well-regarded by his peers that he was posthumously inducted into the Poker Hall of Fame in 2012, 17 years after his death. The writer Paul McGuire called Roberts “the original baller,” the life of the party, with women on his arm and cocaine and heroin to fuel him.

The 1979 WSOP Main Event’s final was a duel between two players on very different classes of drugs, as outlined by writer Des Wilson in Poker Player. According to Crandall Addington, who sat next to him at the table, wild California amateur Hal Fowler “had his pills out there on the table…some Valium and some amphetamines, the real strong ones, and he actually put these on the table by his chips. I really believe that much of the time he didn’t have a clue what he was doing.” His opponent was Bobby Hoff, a strong, aggressive player, who later told Wilson that “I was taking cocaine during that tournament and I probably played as well, if not better, on cocaine. I would put two lines of coke by the bed every night and take it when I woke up. And I would have some cognac as well.” As it turned out, in 1979 Valium and amphetamines and blind luck beat out coke and cognac and serious skill, and the champion Fowler disappeared from high-stakes Las Vegas poker as suddenly as he’d come in.

Stu Ungar, who won the WSOP Main Event the two consecutive years after Fowler’s pill-bingeing hit-and-run, told Nolan Dalla in One Of A Kind that he began using cocaine on the advice of fellow poker players to play marathon high-stakes sessions. A decade later in 1990, while up to 70,000 chips from his starting stack of 10,000 in a quest to win a third Main Event title, he failed to appear on Day 3 and was found unconscious on the floor of his hotel room and unable to return to the tournament. His chip stack was blinded down for the rest of the event, finishing in ninth place for $20,050. Ungar managed to clean up long enough to complete his quest in 1997, when he bulldozed the final table to become the only three-time winner in the tournament’s history – all the while wearing sunglasses to hide his nostrils, which had collapsed from years of abusing his drug of choice.

Hoff’s drug habits were apparently never as severe as Ungar’s. He told Wilson that “(i)t’s like any drug that you’re used to, like coffee or an alcoholic drink” – fitting, since caffeine and alcohol are two other favorites of a lot of poker players. In another world where YouTube videos of them spitting beer or going on drunken rants at final tables on national television weren’t so easy to find, Corona and Michelob might sponsor Men “The Master” Nguyen and Scotty Nguyen. As for caffeine, I remember following the progress of poker pro Bill Edler in the 2007 WSOP Main Event – not just to his eventual 23rd-place finish, but his frequent trips from the Amazon Room to the Starbucks near the Penn & Teller Theatre in the hallway that leads back to the Rio.

An unhealthy-looking Vinny Vinh channeled the ghost of Ungar at the 2007 WSOP. Vinh had once defeated both Edler and Men Nguyen for a WSOP Circuit championship, but in 2007 he took a second-place chip stack into Day 2 of Event #8 and then never returned to play. His stack was blinded down until he finished in 20th place for $16,232. Vinh disappeared for days, then came back for Event #30 and tore through that tournament’s field much like he had earlier in the Series – and then he disappeared again. This time his empty chair took 22nd place for $12,468. Despite all this, his backers put him in the WSOP again the next year. Vinh rewarded their decision with a third-place finish for $99,099, despite showing up late on the final day of the tournament, as Paul McGuire put it at Tao Of Poker, “high on something… and it wasn’t Christ. He was a lit monkey. It could have been a combo of cough syrup and diet pills or maybe just some old fashioned crack cocaine. Most likely, Vinh was cranked out of his mind, which explained why he couldn’t sit still.”

Not everything connected to drugs and poker is about destroyed lives, though. I remember reading an article in a poker magazine several years ago about the prevalence of drug use in poker and being shocked that it never once mentioned marijuana. That’s a strange thing indeed, given how many online players have “420” in their screen names. The wide availability, relatively low cost, and negligible dependence issues associated with marijuana fit well with the lifestyle of a lot of professional grinders. And like Bobby Hoff, a lot of them will tell you that they play better when they’re high. If you’re reporting from the floor of the WSOP and you don’t catch an overpowering aroma of high-grade green from the backpack of at least one player at every tenth table or so, the only logical explanation is that you’re covering the Seniors Event.