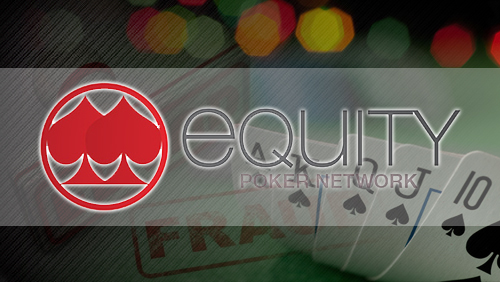 The Equity Poker Network (EPN) have decided that transparency is the best policy after issuing a press release to all media outlets advising them of their discovery of a ‘chip dumping’ scheme operating on their network.

On Monday Sep 22, 2014, the EPN skin 5Dimes contacted the EPN management team to advise them that a very large sum of money had been incorrectly credited to the online account of one of their players.

With the red flag suitably raised, the EPN’s Security and Fraud Department place the account under the microscope and found ‘suspicious activity’ occurring between the monitored account and three Full Flush Poker (FFP) players. The three FFP accounts were opened on Sep 17, 2014 – the same day the mistaken transaction occurred.

It seems the ‘suspicious activity’ was chip dumping, causing several media outlets to speculate that it was a money-laundering scheme connected with a stolen credit card. The 5Dimes player was consistently found to have dumped chips to all three FFP players who would immediately attempt to withdraw thousands of dollars from their player accounts.

It’s clear that the three FPP accounts were set up for the sole purpose of cashing out as much of the misappropriated funds as possible – the press release stated.

“The welfare of our players remains our number one priority, and we will not tolerate cheating or any other form of fraud occurring on EPN. We take all necessary precautions to safeguard our Network, and to protect our players and the integrity of their bankrolls. Our Fraud Team has worked diligently to identify this irregularity, and to deal with the perpetrators quickly and permanently,” said an EPN Spokesperson.

This is not the first time that the EPN has come clean after finding suspicious activity on their network. On Feb 14, 2014, the EPN admitted to a ‘collusion ring’ on their site, only this time there were no details regarding the actual fraudulent activity.

I would like to provide you with a quote from EPN regarding that incident, unfortunately it’s the same as the one they released six months later.