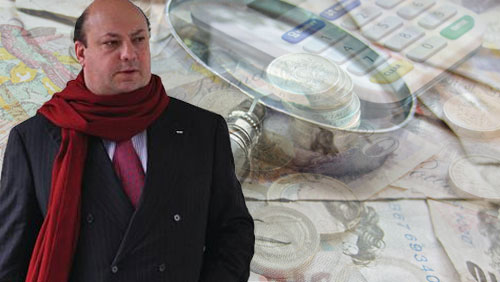 Former star of the partypoker TV show ‘The Poker Den’, Achilleas Kallakis, has been ordered to return just £3 million of the £750 million that he stole in property fraud from the Allied Irish Bank and the Bank of Scotland.

Would you exchange £750 million and the life of a multi-millionaire for five years in prison?

What if you only had to return £3 million of that haul?

That’s exactly what’s happened this week as the former star of the partypoker TV show ‘The Poker Den’, Achilleas Kallakis, was given six months to pay back £3.25 million or serve a default sentence of seven years in prison.

CalvinAyre first reported this story back in March 2010, when Kallakis and his business partner, Alexander Williams, were charged with two counts of conspiracy to defraud, 13 counts of forgery, five counts of fraud by false representation, two counts of money laundering, and one count of obtaining a money transfer by deception, after the pair convinced the Allied Irish Bank, and the Bank of Scotland, to part with loans of up to £750 million.

The pair colluded against the banks in a five year period between 2003-2008, where it’s believed they acquired 16 properties, including the £225m Daily Telegraph HQ, in London, and £100 million Home Office building in Croydon; a fleet of chauffeur driven Bentley’s, a £27 million private jet, a £5 million helicopter, and a super yacht that is gathering lichen somewhere in Monte Carlo.

The 46-year-old, father of four, liked to be referred to as ‘his excellency’, and was known as ‘The Don’ within poker circles. In 2005, Kallakis picked up £100,000 after appearing on the partypoker production ‘The Poker Den,’ and later that year would finish third in the 888.com Pacific Poker Open, for $100,000, competing on a final table that included Barry Hearn (6th), Julian Gardner (4th), and the eventual winner Ian Frazer.

The pair was jailed in 2013. Kallakis was ordered to serve seven years, and his accomplice was given five years. Whilst Kallakis was ordered to pay back £3 million, Williams picked up the smaller tab of £477,474 and 25p. He also has six months to return the money or will face three more years behind bars. Williams has previous convictions of using the names of dead people to obtain British passports.

The pair were finally fleeced after Allied Irish and Hong Kong’s Sun Hung Kai Properties Ltd. reported the pair to the Serious Fraud Office. They were arrested in 2009 and sentenced last year.

Here is Kallakis in action in an incredible hand taken from the partypoker European Open III back in 2008.