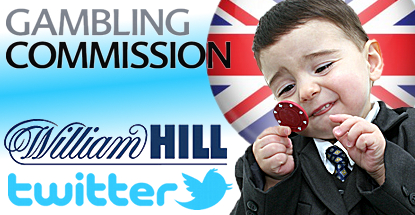 UK-listed bookies William Hill have taken steps to prevent underage gamblers from interacting with the firm’s Twitter feeds. Hills’ regulatory head Andrea Macqueen said the company was employing a new age-screening tool that would ensure the bookie was “engaging with age appropriate audiences across social media.” Hills claims to be the first European bookie to take this step, which will apply across the board to Hills’ global operations in the UK, Australia, Italy, Spain and the United States.

Hills’ age appropriate emphasis comes hot on the heels of the UK Gambling Commission (UKGC) spanking high-street bookies for employing inadequate controls to prevent underage gambling in betting shops. The UKGC’s recent surreptitious study found more than half the shops and adult gaming centers tested allowed a person under the age of 18 years to put money into a gaming machine, play a while, then walk out without being challenged to prove their age.

The venues that failed this round of ‘spot the toddler’ have been duly warned that future such failures would likely result in formal regulatory action. Some of the offending licensees have been required to keep local councils up to speed on how they plan to plug the holes in their underage armor. Given the antipathy with which many local councils view betting shops , the shops had better be on their toes.

The UKGC said the chief causes behind the detection failures included shop staff being too preoccupied with other tasks to inspect all patrons’ faces for visible stubble and/or a world-weary countenance that suggested life’s been kicking them in the nuts for a suitably lengthy period. Other staff appeared “unwilling to challenge” the UKGC’s underage testers, either because the staff member was “lacking confidence” or simply couldn’t be arsed.

On a positive note, the UKGC said early challenges of testers were made by staff who were either stationed close to the shop entrance or where the layout of the shop permitted staff a clear view of who was coming through the door. But even in these cases, some staff were not as “vigilant” as the UKGC might have hoped. Barring significant improvement in detection, the UKGC is contemplating imposing “new measures to improve the level of protection” afforded to minors.