Home / Poker / Question of The Day – Hall of Fame 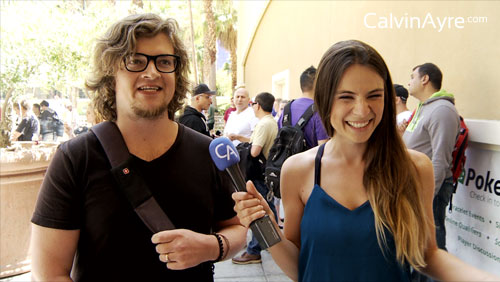 Tatjana Pasalic talks to some Professional Poker Players and they share their thoughts on who they think deserves to be nominated on the Poker Hall of Fame.

The World Series of Poker (WSOP) has brought forward some new talents this year and while everyone is waiting for the final battle in November, the organizers or the international tournament are inviting poker fans to a new challenge—the nominations are now open for determining the 2014 Poker Hall of Fame inductees. The Poker Hall of Fame traditionally elects one or two members annually. The enshrinement ceremony is now held in concert with the final table of the Main Event of the WSOP, held each November in Las Vegas. The main criteria for the Poker Hall of Fame are as follows:

Tatjana Pasalic of Calvin Ayre.com asks some professional poker players, “If you could nominate somebody for Hall of Fame in poker, who would it be?” Bob Bounahra, J.P. Kelly, Keven Stammen, Brandon Stevens, Bryan Huang are just some of professional players who shared their thoughts. Here are the few names mentioned: Antonio “The Magician” Esfandiari, a three-WSOP-bracelet holder and total winnings of $26,222,306. John O’Shea, a former Irish accountant who ditched his career in accounting to play poker. Daniel Negreanu , one of the first ballot Hall of Fame guys. He is the 2013 Player of the Year; a top poker tournament earner; and many consider as the most influential poker player in social media. Phil Ivey, who is not qualified for the age requirement of 40, was also mentioned. However, with 10 WSOP bracelets, it is always a possibility. Keven Stammen, the WPT World Championship winner. And a good friend of Davidi Kitai, the first Belgian to win WSOP bracelet, wants to nominate him. David, that’s a good friend right there!