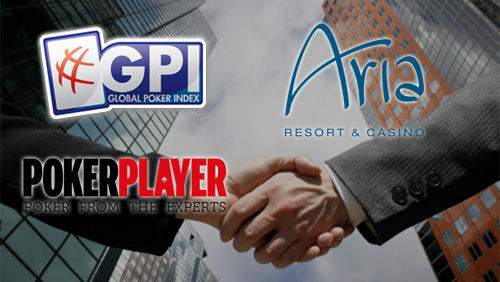 The Global Poker Index (GPI) continues to spread its tentacles all over the poker network with news of more partnerships designed to increase brand awareness.

The latest entities to be connected to the GPI include the Aria Resort & Casino Poker Room in Las Vegas, and the PokerPlayer, American PokerPlayer and PokerPlayer365.com brands.

The relationship with the Aria Resort & Casino Poker Room will see the GPI power a monthly leaderboard that will reward the best tournament players who play at the Aria.

The universally recognized GPI ranking formula will be used to track the performance of the players who participate in the daily tournaments and the leaderboards will be shown on the GPI website, the Aria website and locally within the Aria poker room.

Adam Altwies, Aria’s Director of Poker Operations, said that he is looking forward to partnering with the GPI to help reward the ‘best players’ and not ‘the richest.’

Alex Dreyfus, CEO of the GPI, believes that this is just the start of things to come, with more of these partnerships being developed in the next few months. The GPI already ranks players from 1,400 casinos across 74 countries.

Not resting on their laurels, the GPI have also teamed up with PokerPlayer magazine.

The relationship means that PokerPlayer, American PokerPlayer and the social media site PokerPlayer365.com will push regular content published on the GPI and Hendon Mob website.

Dave Woods, Editorial Director of PokerPlayer, said he was very proud to be affiliated with the GPI, and said that ‘data is the foundation of informed content in the modern world and having access to the unrivaled resources of GPI and the Hendon Mob will ensure we bring the highest quality editorial to an even bigger circulation.’

Dreyfus indicated his delight at joining forces with what he believes to be the best poker magazine in the UK, and also suggested that the PokerPlayer community will have a hand in the nominations for the 2015 European Poker Awards.

PokerPlayer magazine has the biggest circulation of any paid-for poker magazine in the UK, and they have just agreed to furnish all 40 card rooms of the Grosvenor Casino Chain with free copies, pushing their reach even further into the UK poker community.