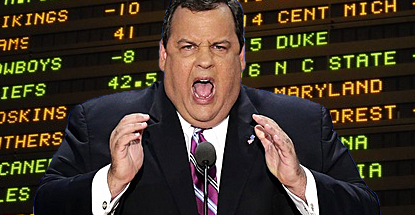 New Jersey Gov. Chris Christie (pictured) has vetoed the state’s latest sports betting legislation. The bill, which was introduced in June by state Sen. Ray Lesniak within hours of the Supreme Court declining to hear an appeal of federal court rulings blocking the state’s previous betting legislation, would have repealed state laws preventing Atlantic City casinos and state racetracks from accepting wagers on sporting events. Christie had until Monday to decide whether or not to sign the legislation, but apparently he’s got plans this weekend.

Unlike Christie’s February 2013 conditional veto of the state’s online gambling legislation, Friday’s was an ‘absolute’ veto. Christie said he still favors legalizing sports betting but believed last year’s Third Circuit Court ruling had ended the discussion on whether the state had the right to ignore the 1992 federal PASPA prohibition on sports betting. Christie said he personally disagreed with that ruling, but insisted that “the rule of law is sacrosanct, binding on all Americans.” Christie said this belief held “special solemnity to those elected officials privileged to swear an oath to uphold the laws in our nation.”

Christie hedged his bets somewhat by insisting that he remains “open to exploring legally sound” methods of bringing sports betting to the Garden State and wondered if “a different approach towards sports wagering would comply with federal law.” Christie also suggested sharper legal minds pore over the Third Circuit Court ruling to identify other “legal avenues for permitting sports wagering within the state.”

Lesniak reacted to Christie’s decision by saying the governor was “giving up” and had stuck “a dagger in the hearts of the ailing casino and horseracing industries.” Lesniak told NorthJersey.com’s John Brennan that he was “certainly going to try” to convince legislators in the state Assembly and Senate to override the veto. The legislation passed by overwhelming majorities in both chambers, making an override not beyond the realm of possibility, but no previous attempt by state Democrats to override a Christie veto has met with success.