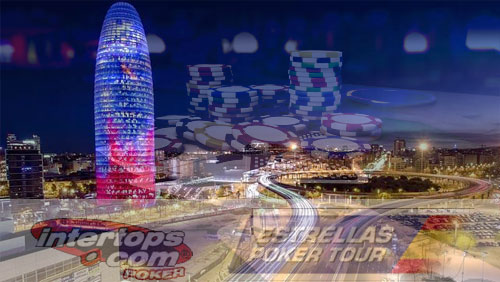 Satellites for a €2,000 package to Barcelona will be running daily from July 30th

29 July 2014, St John’s, Antigua (Press Release) — The first big poker tournament after the World Series is less than a month away, and Intertops Poker players have the chance to book their place at the Estrellas Poker Tour Main Event in Barcelona with daily satellites starting this week.

The $55 final satellite will take place on August second, awarding at least one €2,000 ($2,700) package which comprises a €1,100 main event entry, five nights’ accommodation in Barcelona and $400 in travel expenses. However players with smaller budgets can get their feet on the first rung of the ladder for just $2.20 in one of several daily satellites.

Last year’s Estrellas Main Event in Barcelona attracted a huge 1,798 players, making it the largest ever poker tournament on Spanish soil with a prizepool of more than $1,000,000. German amateur Soenke Jahn won the 2013 tournament for more than $200,000, while this year the main event could break more records with an extra start day expected to only increase the size of the field.

“The Estrellas Poker Tour has been hugely popular with players from around the world, and we are delighted to be sending our players to Spain for one of the biggest and best tournaments of the year,” Intertops’ poker manager said.

“With sunshine, sangria and a chance to play in a million dollar poker tournament, it is easy to see the appeal of the tournament. We can’t wait!”

In addition to the Estrellas satellites, Intertops Poker will continue with its regular program of Texas Hold’em, Omaha and more, with tournaments and cash games running around the clock.

About Intertops Poker (http://poker.intertops.eu)
Intertops Poker is a global poker room on the Revolution Poker Network offering Texas Hold’em, Omaha ring games and tournaments of all stakes and levels 24/7. Players anywhere in the world can win their share of over $20 million in monthly tournament payouts and $6 million in tournament guarantees every month. Intertops Poker also offers all players access to one of the most lucrative loyalty programs in the industry. New players receive a 200% bonus up to $1000.