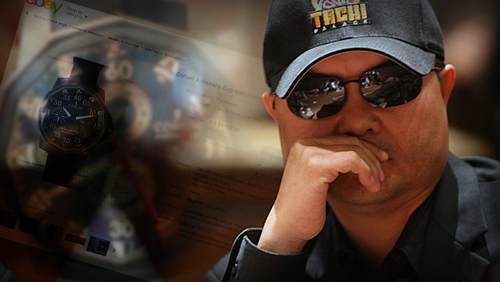 Jerry Yang’s 2007 World Series of Poker (WSOP) Corum Admiral’s Cup watch is the latest of a string of Yang’s former possessions to be auctioned on eBay with the highest bid currently standing at $3,550

The former 2007 World Series of Poker (WSOP) Champion might not have endeared himself to the hearts of the poker pro, but lest we not forget that he gave 10% of his winnings away to charitable causes.

Times have changed since that huge win and now the restaurant owner has to sit back and watch whilst his prized possessions are flogged on eBay. The latest item up for sale is the Corum Admiral’s Cup Competition watch that the WSOP awarded to Yang after his 2007 victory.

If you fancy owning this tasty timepiece then head over to eBay and get bidding. You have until 8:14pm EST on Thursday before the auction ends.

Yang had to part with his watch, his WSOP bracelet, and 16-other pieces of jewelry, last March, after the IRS caught up with him over outstanding taxes that hung just below the $600,000 mark. Yang won $8.25m after defeating Tuan Lam in heads-up action back in 2007.

At the time of writing, 46 people have made bids on the watch, and the highest bid stands at $3,550. The current owner bought the watch at an IRS Seizure Auction last year in Sacramento, CA, and its believed to be worth in excess of $9,000.

The last time Yang was in the news was after the former WSOP Main Event champion, Joe Hachem, accused Jerry Yang and Jamie Gold, of ‘destroying the legacy of the world champ.’

Yang used over half a million dollars of his winnings to open a Sushi restaurant called Pocket 8’s Sushi and Grill in Merced, CA, and he recently told PokerNews that the business was going well.