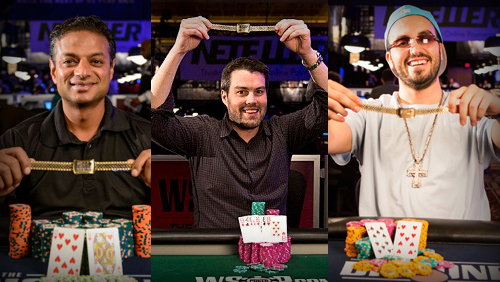 Day 37 WSOP recap sees Salman Jaddi take the bracelet in the final $1,500 event of the series; Matt Grapenthein stop Todd Brunson from taking his second bracelet in the $10k Seven-Card Stud, and Bryn Kenney proves a healthy body is conducive to the right moves on the felt with victory in the $1,500 10-Game Mix.

As players from all over the world converge on the World Series of Poker (WSOP) for the Main Event, it was no surprise that the final $1,500 of the series would be the biggest of them all.

2,563 players created a first prize of $614,248 and that money now resides in the bank account of Salman Jaddi, after overcoming Brandon Hall in a tough heads-up encounter that breached the five-hour mark.

It was only Jaddi’s third-ever WSOP cash, and he had to get through a tough field that contained the red hot Zach Gruneberg, Cherish Andrews, Kurt Jewell and two-time WSOP bracelet winner Steve Sung.

A special high-five goes out to Gruneberg who was making his third deep run in the $1k/$1.5k events where he has taken over half a million dollars away from the dirty green baize this series alone.

Just days after Phil Ivey put some daylight between him and Phil Hellmuth, in the WSOP bracelet wars, the most decorated WSOP player in history found his way to another final table. Unfortunately, Hellmuth just didn’t have the stamina to make it to his 14th WSOP bracelet, and he eventually bowed out in sixth place.

Matt Grapenthien overcame the starting chip leader, Todd Brunson, to take his first bracelet, and in doing so prevented the son of Doyle from winning his second.

The final table also included James Obst, who recently finished 10th in the $50K Poker Players Championship, Ben Yu, Henrik Hecklen and the former Holocaust survivor Henry Orenstein. The last time Orenstein cashed in a WSOP event he was winning the $5K version of this event way back in 1996.

There is no more deserving bracelet winner than Bryn Kenney, after he led from start to finish in the six-handed version of the 10-Game Mix.

Kenney has made some huge changes to his life, and has never looked better so it was good to see those changes bear dividends on the felt.

“I would have been really upset if I couldn’t bring this title home. The last time I played this tournament I was second in chips with 10th left and got unlucky against Vanessa Selbst so it’s nice to get some redemption back,” Kenney told PokerNews after his win.