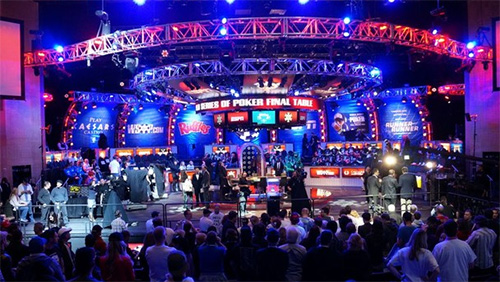 A year ago, 6,352 hopefuls took their seats in the 2013 World Series of Poker (WSOP) Main Event, all vying for the most prestigious prize in poker history. Among them were past champions , poker legends, dream chasers and grinders from around the world. A 24-year-old from Michigan, Ryan Riess, was just another young face in the field but things changed slowly over the course of the next seven grueling days of poker. Following Day 7, Riess was one of the famed November Nine, taking the fifth-largest stack in to November. Eight more eliminations later and Riess was the last man standing. He became the 45thWSOP Main Event champion when he defeated Jay Farber in heads-up play; earning $8,361,570, a platinum WSOP bracelet (a half-million-dollar piece of jewelry) and poker immortality.

This year’s World Series of Poker Main Event—with $10,000,000 guaranteed—is set to begin on July 5th. With 6,000-plus players expected to buy-in, another poker multi-millionaire will be crowned. We decided to ask our readers, “Will a current WSOP bracelet holder win the main event?”

Majority of our readers, with 78 percent votes, said, “No.” To poker fans, that should come as no surprise, as there have only been three bracelet holders to win the WSOP Main Event since 1999; Chris Ferguson in 2000, Carlos Mortensen in 2001 and Greg Merson in 2012.

Yet 29 percent voted, “Yes.” It’s a long shot but there is some hope that someone gets on a hot run and earns their second or third bracelet at the main event. Perhaps one of the Phils will add to their double digit bracelet total.

For this week’s poll, we ask our readers, “Who has had a better poker career?”Is it Phil Hellmuth, the all-time World Series of Poker bracelet leader with 13 or Daniel Negreanu who earned $13,080,189, the second highest total of any poker player living or dead? Check back next week to see what our readers think.

Devilfish Misses Out on Poker Hall of Fame; Mortensen & Brunson Are In
Lee Davy
17 October 2016