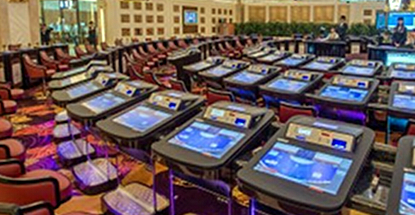 The raft of new resort casinos scheduled to open on Macau’s Cotai strip over the next few years are expected to bring an accompanying spike in the number of electronic table games (ETG). There are currently about 5.5k ETG in operation in Macau casinos, but Union Gaming Research analysts expect that figure to grow nearly 64% to 9k by the time SJM Holdings’ Lisboa Palace opens in 2017, marking the completion of the last of the casinos currently under development in Macau.

The appeal of ETG is obvious given the fact that Macau regulators are keeping a (more or less) tight cap on the number of live gaming tables. Casino operators have responded by prioritizing live tables for use by VIPs or, more recently, even more profitable premium mass gamblers. But this has resulted in significant upward pressure on minimum stakes, which has left many mass market gamblers at the lower end of the scale – HKD 500 (US $65) per hand and under – with few tables at which they are welcome. These gamblers are increasingly being steered toward ETG play.

Stadium-style ‘hybrid’ ETG with 50 or more seats also allow casinos to hire fewer croupiers, the supply of which is almost as scarce as live table allocations. There were suggestions at the start of the year that Macau might impose a cap on ETG similar to that imposed on live tables, but no further discouraging words have been heard on the subject. Union Gaming says SJM is the current ETG king, with 38% of the machines in use. Sands China is next with 30%, with Melco Crown Entertainment well back at 17%.

The appeal of ETG is spreading to other Asian gambling jurisdictions. Over the next three years, Union Gaming believes a further 1,500 to 2k ETGs will be installed in casinos currently operating or being built in the Philippines, Cambodia and South Korea. The ETG manufacturing market is dominated by six companies: Alfastreet, Aruze Gaming America, Bally Technologies, Aristocrat Leisure, Novomatic and Paradise Entertainment’s LT Game division.