WSOP Day 9 Recap: Justin Bonomo Sheds the Bridesmaid Dress; Hellmuth Selling Himself on the Net and Much More 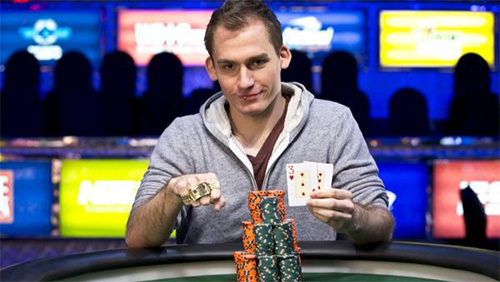 The website If Only promises ‘Extraordinary Experiences for Good’ and today I have stumbled across two people at opposite ends of that particular spectrum.

At one end you have Phil Hellmuth and the other you have Justin Bonomo.

Before Wednesday had rolled into Thursday, one had won more World Series of Poker (WSOP) bracelets than anyone else alive, or dead, and the other was seemingly allergic to winning them.

Oh what a different a day makes.

According, to the If Only website you can: “Have a drink with Phil {Hellmuth} as he poses for photos and signs autographs, then talk to him about what it’s like to be back at the Main Event that he famously won in 1989. Phil will be looking to add to his record 13 WSOP bracelets, and you could be there to ask him all about it.”

I know first hand how difficult it is to tie this man down for an interview – but $16,700? That’s taking the lid off the biscuit tin and eating the whole lot.

What people will do for ‘Extraordinary Experiences for Good.”

And that’s exactly what Justin Bonomo has just banked in his memory files after discarding his bridesmaid dress, and bouquet, for a smart suit and gold bracelet.

Bonomo overcame Mike Sowers in heads-up action to take the gold in Event #11: $1,500 Six-Handed No-Limit Hold’em (NLHE), and he did it the hard way, after fighting back from a 4:1 chip deficit.

ZeeJustin’s victory comes just days after he finished runner-up to Tuan Le in Event #5: $10,000 Limit 2-7 Triple Draw Lowball Championship, and makes him an early candidate for the 2015 WSOP Player of the Year award.

I was only speaking to him yesterday and he was telling me how great life was.

Well it has just gotten a whole lot better.

That was the only gold bracelet dished out today, but there are two more events that have gobbled through their starters and main courses.

Event #12: $1,500 Pot-Limit Hold’em is ready to plate up the dessert after Gregory Kolo leads the final eight players as the second day of action came to a close.

Kolo eliminated the former November Niner, Phil Collins, in a cooler of a hand KK v QQ to grab a big chip lead towards the end of the 20th level.

Also making the final day is that old stalwart Tom McCormick. The Shamrock Kid has made his 46th WSOP cash and the whole world of poker will rise and salute if he can manage to take home his first bracelet. McCormick first cashed in a WSOP event back in 1992.

If you like your No-Limit 2-7 Draw Lowball, then you are in store for a real treat when the WSOP Live Stream starts motoring on the final day of action in Event #13.

Kid Poker has one of the more high profile bracelets bets of the summer, and we shouldn’t bet against him putting that one to bed very early in the series.

The only other event that saw Wednesday action was the start of Event #14: $1,500 Limit Omaha Hi-Low. 1,036 players turned up to split a few pots, and 220 will be returning for a second day of action.

Leading the way is Kai Raichura who bagged up 68,100, to take a slight lead over the WSOP bracelet winner Konstantin Puchkov, who managed to sneak 65,800 into his bag when the end of the day came.