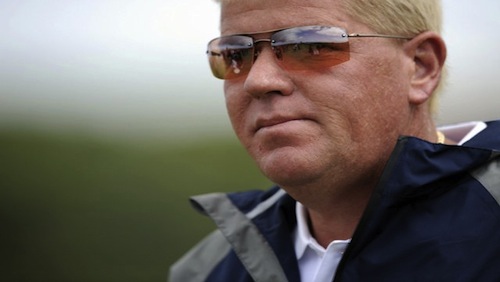 John Daly has never been the type to shy away from talking about his rather colorful past. He’s opened up about his past bouts with alcoholism and during a recent interview with Yahoo Sports’ Graham Bensinger, Daly admitted that he had lost $55 million in gambling over 16 years.

The admission isn’t really new for Daly, having detailed his gambling exploits in his 2006 autobiography My Life In and Out of the Rough. But he brought the issue back to light during his conversation with Bensinger, detailing some pretty hardcore casino excursions that left him millions in the red. On one specific instance, Daly talked about smoking $1.65 million in just five hours playing $5,000-a-hit slot machines, a run he attributed to losing out to Tiger Woods in a play-off at the World Golf Championships in San Francisco.

“I love the action, I love the adrenaline going in there [casinos],” Daly told Bensinger. “I’ve played slots for two days in a row. I’ve played blackjack for two days. [All in] one sitting. The only time I’d get up is to go to the bathroom. Time goes by so fast and if you’re on a roll and you’re winning, I’d just keep on going, keep on playing.”

Soon enough, his losses started piling up to over $50 million. That brought about a new mindset that Daly follows every time he walks through a casino turnstile. “Now if I go and gamble, I go in and play the $25 slots,” he said. “If I hit something I might move up to the hundreds. But I don’t do what I used to do anymore.”

Therein lies the lesson that all gamblers must abide by. Gambling can be fun if you play within your means. That’s why it’s called ‘disposable income’; it’s money you can spend – and maybe lose – without losing your shirt.

That’s what Daly does now and so far it’s worked out for him. And ever the contrarian that we love, Daly said he doesn’t regret anything about his old gambling explosions, saying he had “fun doing it”.