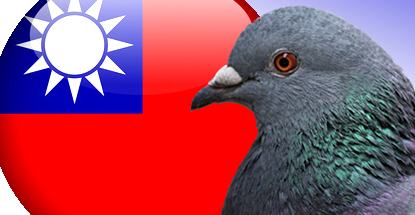 Police in Taiwan dismantled an online sports betting operation earlier this month, eliminating at least one wagering option local punters may have had ahead of next month’s kickoff of the 2014 FIFA World Cup. The Taichung-based betting ring had reportedly been taking wagers since last year right up until the Criminal Investigation Bureau (CIB) pounced on May 14. Nine suspects were detained along with 10 computers the ring used to handle wagers on baseball, basketball and European football matches.

Taiwan punters’ legal sports betting options are limited to the Taiwan Sports Lottery, but illegal options abound. That includes Taiwan’s immensely popular pigeon racing industry, the annual value of which has been estimated at around NT$70b (US $2.3b). There are over 30k pigeon breeders in Taiwan, who race some 2m birds each year. Trouble is, about 1.5m of those birds die in the process, according to animal rights activists at the People for the Ethical Treatment of Animals (PETA), which has called on the Taiwanese government to rein in the sport’s excesses.

In Taiwan, pigeon racing involves loading the birds onto ships, releasing them only after the ships have traveled hundreds of kilometers from shore. The tagged birds are then in a race to get home (a) before the other pigeons and (b) before they die of exhaustion. PETA spokeswoman Ashley Fruno said that pigeons were forced to race despite injuries and often in extreme weather. The birds are even subject to being kidnapped along their routes and held for ransom by their owners. Worse, underperforming birds are sometimes killed by irate owners.

Fruno said the sport has been linked to illegal gambling, which is hardly surprising given the aforementioned paucity of legal wagering options in Taiwan. A little more surprising are local media claims that pigeon racing is vulnerable to fixing, because of the obvious difficulties in recruiting pigeon hookers with which to honey-trap the competitors. Finding a pigeon hooker that isn’t swimming with disease might prove even more difficult given the birds’ notorious reputation as rats with wings. PETA’s next challenge, no doubt.