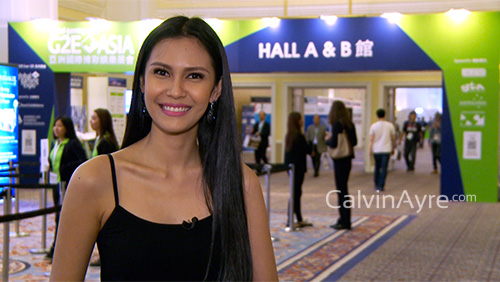 It’s the 8th year of the G2E Asia Conference and the organizers are expecting their highest turnout ever with an anticipated 6400 visitors to attend the exhibition. Along with the massive exposition floor, there are three days of speakers, panels and educational forums.

The first session of the morning focused on the future of Macau. The buzzword for the day was diversification as Tim Craighead Director of Asian Research and Senior Gaming Analyst for Bloomberg moderated a panel with the President of Wynn Macau Gamal Aziz, Sands Resorts Senior VP of Global Gaming Strategy Grant Chum and the CEO of MGM China Grant Bowie.

The speakers all talked about the importance of finding other revenue streams beyond pure gambling, looking for ways to attract the premium mass-market gambler rather than rely solely on the VIP market. One of the speakers, I apologize I missed who said it, clarified the use of premium mass-market player versus VIP player. The Premium mass is what would be traditionally considered a VIP customer; younger, business owner, affluent but in order to avoid confusion with the junkets who adopted the name first, they chose premium mass market players.

One of the many benefits of the premium mass is that they don’t rely on credit and as Aziz points out, currently the premium mass players are settling for wherever they can find a room but when more properties open in 2016, these players will have choice in where they can stay. It will encourage the resorts to step up their game and Aziz proudly states that Wynn is ready for that.

Next up Geoff Freeman, President of the AGA talked about the growth of Macau over the years and then introduced the Keynote speaker for the event, Co-Chairperson and Executive director of MGM China, Ms. Pansy Ho.

Pansy Ho continued with the talks of diversification for the Macau gaming market. Explaining that the government can’t continue to rely on the mono-pillar of gaming and that gaming needs to be used as a means to an end. As it stands right now, the Macau gaming market accounts for 1/4 of the employment market and 80% of the tax revenues. Gaming investments should plant the seeds that grow employment in other areas such as retail and food and beverage.

She highlighted some of the efforts the government has championed to further diversify the market; pointing out the Macau Grand Prix and as a key win. Ho talked about the importance of getting the non-gaming side of Macau to the world through broadcast event, including 12 that were broadcast to Mainland China.

She recounted the huge steps Macau took at the turn of the Millennium and if convinced that it’s ready to take another huge step forward in putting the Macau brand on the global stage.

The Rising Sun: Will Casinos ever come to Japan

The session was missing Katie Lever but Moderator Rich Baldwin; the MD of Union Gaming Group had a discussion with the CEO of the International Casino Institute Takashi Kiso and Senior VP of Global Gaming development at the MGM Edward Bowers.

The speakers all lamented the fact that Japan has been unable to push something through the National Diet. The reason as explained by Mr. Kiso is that it’s a members bill, not one put forward by the government so it’s down the priority list, if a government bill is waiting it goes before the members bill.

There had been hopes that this session would finally see the passage of the casino bill, as the political climate is more stable than it has been in years and there is a renewed emphasis on the economy. However, time is running out. The bill has finally reached the national level but as the upper house requires 20 days of discussion, that leaves only 10 days for the lower house to approve the bill with the current political session breaking in June 22 until September.

Bowers spent much of his time talking about MGM’s hopes for casinos in Japan and without giving away too much strategy, expressed his companies intentions to focus on larger markets. He also said he encouraged competition, suggesting that Tokyo would benefit from a cluster of competing casinos in a central area. Bower said that rather than limit the number of Casinos, Japan should allow all those that meet a certain criteria. Japan has a deficit in tourism, meaning more Japanese travel to other countries than tourists come to Japan, Bowers feels his cluster of casinos could help change that.

With the Olympics only 6 years away, they all agree it’s imperative that the laws are passed and construction begins, it’s not just about the Olympics but after the Olympics.

When asked about the potential of the Japanese Casino gaming market, Bowers said a quick and dirty unrestrained market could be worth $40 Billion but realistically he suggested $20 billion with Tokyo accounting for $10b, Osaka another $5B and the other $5B spread throughout the country.

MGM is the most prominent to put their hat in the ring for a license but Bowers is sure that a lot more will come. They are spending a lot of time in Japan to learn what will be expected, they want to offer a unique Japanese experience to cater to the local market but just as important provide Japanese content for visitors. MGM wants to be an exporter of Japanese culture.

One interesting rumor to come out of the session was the of the group of Diet Members pushing for the Casino legalization, about 30% could be against it and the only reason this 30% joined the group was to ensure nothing happened.

But as Bowers points out the votes are there, the bill just needs to be positioned to be ready before time runs out on the current session.

Steve Park, the Managing Director of KORE Co. talked at length about the South Korean gaming market and the potential of a more open Korea with an increase in integrated resorts and possibility of allowing all casinos to accept local Korean gamblers.

Park said that Korea would likely have their hands forced if Japan allows casinos as a large portion of those visiting Korean casinos are from Japan. He also talked about how a more developed casino market could attract gamblers from Northern China as it would be easier to travel to than more southern destinations.

Park is confident that with the opening of integrated resorts, could be on par with Singapore but if locals are allowed access it would be a game changer.

In the early afternoon, Dean Macomber discussed expanding gaming in Russia. He discussed the various casino zones and the pros and cons of investing in Russia with the current reputation of the country on the world stage being the largest hurdle. He closed his short session stating that Russia isn’t as scary as it seems and the risk reward opportunities exist.

Tim McNally, the Chairman of Nagacorp spent his time speaking about the investment opportunities in Cambodia.

The day closed with a panel moderated by Ben Lee of IGamiX consulting discussing the current progress of Entertainment City in the Philippines with Armin Santos of Belle Corporation and Christopher Tio of DFNN.

Much of the discussion surrounded the regulatory regime of Pagcor. Certain (read Western) investors are still leery of investing in a market where they must compete with the group that regulates land based gaming in the country.

Neither Tio nor Santos thought it to be much of a problem as they emphasized the growing separation between the gaming side of Pagcor and the regulatory side of Pacgor.

There was even talk about Pagcor privatizing their casino operations but as the number three revenue generator for the Philippines government Pagcor would have to find ways to maintain it’s contribution to the government.
There was some concern that the market may not be as potentially large as once thought as when it opened five years ago; Genting’s Resorts World significantly grew the gaming market but when Solaire opened in 2013, the Market only grew 10%. Some people were nervous that with several more casinos going into Entertainment City, the market may not be able to accommodate the supply.

Santos talked about how partnering with international companies would help bring more international players and their increased focus on family entertainment will help grow the market.

Many in the audience seemed unconvinced but the duo both seemed confident the market would thrive.

We’ll be back tomorrow with a recap of day 2 from G2E Asia.