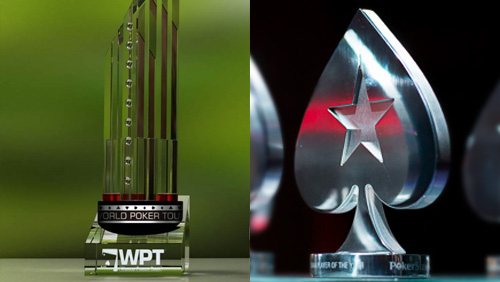 As the World Poker Tour (WPT) hits its climactic note in Atlantic City, the European Poker Tour (EPT) sings its final song in Monte Carlo, and Lee Davy takes a look back to see who came out on top of the Player of the Year races.

What’s the difference between football and poker?

When the football season ends you are throwing rope over the nearest high place, and…the poker season never ends.

The European and World Poker Tour’s may have called time on their shenanigans, for now, but the poker circus hauls its big top into the adult playground of Sin City for six more weeks of idol making.

But before we look forward, let’s take a look back.

Who were the kings and queens of the two tours that dominate the action whilst the WSOP lies purring in the undergrowth?

One man dominated Season 10 of the EPT and that was Ole ‘wizowizo’ Schemion.

A man who is so green around the gills that the tables of the WSOP have not yet felt the pertness of his bottom because he is too young.

He finished the season with aplomb, after winning the €10,300 High Roller in San Remo, before heading to Monte Carlo where he cashed in all three of the marquee events for over half a milly.

The young German has amassed over $5.2m in a little over three-years of live competition, and I’m not even delving into the huge successes he has had playing online.

Schemion won the EPT10 Player of the Year (POY) award at a canter, after amassing 1,358.47 pts. in the first year that the rankings have fallen under the watchful eye of the Global Poker Index (GPI).

There isn’t a specific title for Female Player of the Year and I’m not sure if that has anything to do with not wanting to separate the sexes, or the fact that Vanessa Selbst simply doesn’t have enough room in her trophy cabin for all the silverware.

Selbst (803.87 pts) finished ahead of the ladies once again – fourth in all gender competition – and her nearest rival was Ana Marquez who finished in 71st place with 416.88 pts.

EPT Player of the Year Top 10

If Ole Schemion dominated the EPT, then Mukul Pahuja absolutely smashed Season XII of the WPT to smithereens.

At one point it seemed as though Pahuja was making more main event final table appearances that the Royal Flush Girls, such was the alarming frequency of top six finishes that he was racking up.

But unlike Schemion, that big win was missing from the Pahuja CV as he had to settle for the agony of the bridesmaid on two occasions.

Nevertheless, Pahuja’s exceptional performances meant he locked down the title with the WPT World Championships still to play, and finished with a WPT history setting 3,450 points.

WPT Raw Deal host, Tony Dunst, also had a fine showing with a nepotistic fifth place finish courtesy of his first-ever WPT title in the Caribbean and a third place finish in the WPT World Championships.

Yes you’ve guessed it; Vanessa Selbst, who finished in 36th place with 1,000 pts. Lily Kiletto was the next in line ranking 50th with 800 pts.

WPT Player of the Year Top 10