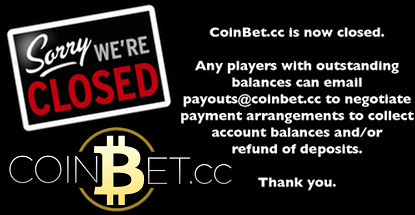 Bitcoin-only online sportsbook Coinbet.cc has closed its doors mere months after the site first launched. Over the Easter holiday weekend, visitors to the site were greeted with a notice indicating that the site was “now closed.” The notice instructed players with outstanding balances to contact an email address to resolve their situation.

Players responding to the notice have been contacted by a “liquidation firm” claiming to have been retained by Coinbet “to ensure proper liquidation of all assets … All outstanding debts and accounts will be paid out in accordance with the arrangement made by Coinbet and the sale of all related assets.” Despite these vague assurances, few Coinbet players appear convinced they’ll be made whole anytime soon. Estimates of the total sum owed to Coinbet players range as high as $5m.

MICHAEL KATZ AND THE BONUS FROM HELL
One Coinbet player who likely won’t be getting satisfaction is poker player Michael Katz, who claims Coinbet stiffed him for $340k. Just one day before Coinbet’s site went dark, Katz started a lengthy and screenshot-heavy thread at Bitcointalk.org (read it here) detailing his frustrations with attempting to withdraw funds from Coinbet.

In a nutshell, Coinbet claimed Katz had failed to meet his bonus rollover requirements and therefore wasn’t eligible to withdraw any funds. Katz was betting tens of thousands of dollars at a time, depositing 28 times and zeroing out his account on 25 occasions, yet his rollover requirement continued to grow, ultimately topping $2.2m.

Suspecting Coinbet was employing some kind of cumulative rollover requirements, Katz contacted Coinbet support, who initially told him he “would only need to clear your CURRENT bonus, to meet rollover requirements.” The support staff went on to say they’d “never heard of ‘cumulative bonuses,’ but it certainly doesn’t sound fair or reasonable.”

But a later email from Coinbet support told a different story, saying Katz had never zeroed out his account and therefore “you’ve always been betting on a portion of bonus funds.” Seems Coinbet’s software would only display player balances in terms of dollars on the home page, while showing the true balance – which displayed dollars AND cents – on a secondary display on the transactions page.

While Katz argued that the $0 balance displayed on the home page led him to believe his account had been emptied, Coinbet insisted that his account had never actually hit absolute zero, therefore his rollover requirements continued to climb. Katz eventually convinced Coinbet support to reduce his rollover requirement to $554k, only to have the company reverse its position after getting “a lot of pushback from management about this.”

THE FIRST RULE OF COINBET IS…
When a frustrated Katz told support he was thinking of going public with his problems, he was told that doing so would result in the immediate closure of his account. Sure enough, Katz discovered this clause in Coinbet’s Terms & Conditions:

“By joining CoinBet.cc, you agree to keep all experience, winnings, losses, payouts, disputes, and gameplay confidential and are forbidden from releasing any information publicly, including but not limited to, message boards, news agencies, forums, blogs, or other websites, without the express written consent of CoinBet.cc. Any information publicized without the express written consent of CoinBet.cc will result in immediate termination of the account in question and forfeiture of any winnings or account balances.”

NOW HOW MUCH WOULD YOU PAY?
With nothing left to lose, Katz proceeded to bet like a proper degen, rolling over the full $2.2m requirement TWICE over, running his account balance up to $340k in the process. But Katz’s subsequent withdrawal requests were met with a month of stalling, then finally an offer to either (a) refund Katz’s last deposit only or (b) issue the full account balance in “Coinbet equity in exchange for you becoming a sportsbook consultant with our company.”

When Katz chose Option A, Coinbet reverted to negotiation mode as to exactly how much he was owed. Then on April 17, support sent Katz a message quoting some “feedback” regarding his case. In short, “we cannot make exceptions for one person … if he wants to cash out his winnings and bonus funds then he needs to follow the requirements to do so.” Two days later, the site went offline.

BITCON
A contributor to Katz’s Bitcointalk thread followed up on the story at Simonsblogpark.com, where he claimed that Coinbet’s founders launched their site with very little capital, leaving them vulnerable to any sharp bettor who got on a hot streak. Sharp-eyed Bitcointalk posters subsequently noted that the image of Coinbet’s office displayed on the company’s Facebook profile was actually a Photoshop template with their logo superimposed.

Several Coinbet players, including Katz, have noticed that two different Bitcoin-friendly sports betting sites – Betcas.com and SportBet.im – appear to have links to Coinbet. The players claim to have sent emails to these sites requesting password reminders, only to receive replies featuring their old Coinbet passwords.

In January, CalvinAyre.com noted another odd section of Coinbet’s T&C’s, which took pains to stress that Bitcoin-based online gambling “is not an illegal event under the Wire Act or UIGEA” yet also claimed the company “do not accept deposits or wagers from the USA,” suggesting Coinbet was already prepping ways to void any US bettors who might prove too sharp for Coinbet’s taste.