Hillsborough Inquests: Investigations to Last a Year; Footage ‘Too Gruesome’ to be Shown

The inquests into the death of 96 football fans attending the 1989 FA Cup Final between Liverpool and Nottingham Forest, at Hillsborough Stadium, are likely to take a year to conclude, and digitally enhanced camera footage is deemed ‘too gruesome’ by police sources. 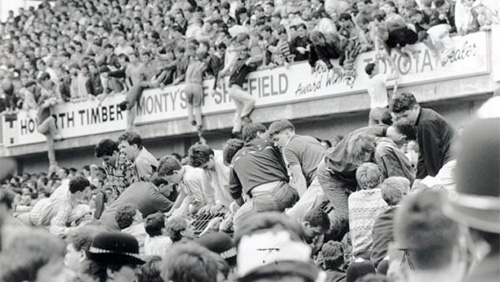 25-years after 96 men, women and children tragically lost their lives in Hillsborough Stadium, during the 1989 FA Cup Semi-Final between Liverpool and Nottingham Forest, Lord Justice Goldring has opened up the inquest that the families are hoping will produce the justice they are so desperately searching for.

The latest inquest started on March 31st and Lord Justice Goldring opened up the hearing by exonerating the victims when he said none of them should be blamed for the tragic deaths.

The inquest is currently experiencing a week long break to give the families of the victim’s adequate time to mark the 25th Anniversary of the deaths, which has been so respectfully honored at football grounds throughout the UK this weekend.

When the inquest continues it’s believed that hours of television and CCTV footage, never before released to the public, will be crucial to the case. The footage is being edited by experts, and The Telegraph has reported that the some of the digitally enhanced images are going to be ‘too gruesome’ for viewing.

A police source told the Telegraph: “”What were once fuzzy pictures are very vivid. Some of the detail they now show is hard to stomach.

“The faces are the people being crushed are clear to see, it’s gruesome evidence. It’s hard to watch these people dying.

“We can’t see the jury or the families being shown all of it. It would be too much for them to take.

“I know some officers who have been around a long time and seen some terrible things, and even they had to turn away from the screen.”

Operation Resolve will provide Lord Justice Goldring with vital evidence concerning stadium safety, crowd management on that fateful day, the emergency response, the pathological causes of death in each case, and the experience of each individual deceased person.

Information pertaining to the inquests can be found here.