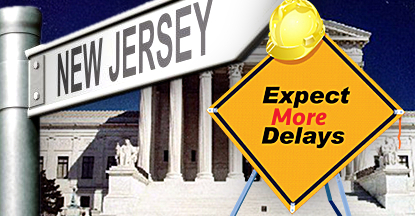 New Jersey will have to wait a little longer to learn whether the US Supreme Court will consider its bid to offer legal sports betting at Atlantic City casinos. The state and its supporters – including the states of West Virginia, Wisconsin and Wyoming and a trio of “sports law analytics scholars” – have all filed their paperwork explaining why the Court should strike down the federal PASPA sports betting prohibition and let New Jersey enjoy the same single-game sports betting privileges as Nevada.

Those opposed to New Jersey’s quest — the US Department of Justice, four pro sports leagues and the NCAA – were supposed to file their response briefs by April 21. The Court has now granted these parties a further extension to May 14, after which New Jersey and its allies will have a 10-day period in which to file a reply brief. Sports law attorney Daniel L. Wallach believes this new delay means we won’t learn whether the Court will agree to hear the case until late September at the earliest. As such, even if the Supremes do agree to hear the case, it will likely be well into 2015 by the time they actually hand down a decision.

MISSISSIPPI TASK FORCE TO STUDY SPORTS BETTING, ONLINE GAMBLING
Mississippi may not have filed its own brief in support of New Jersey’s efforts, but that doesn’t mean the state wouldn’t happily share in the spoils should the Court overturn PASPA. On Thursday, House Gaming Committee chairman Richard Bennett announced the formation of a task force to study the pros and cons of both legal sports betting and online gambling. Bennett told the Sun Herald that he wasn’t necessarily endorsing either form of wagering, but wanted state legislators to have all the info they need to make an informed decision if/when the state takes another run at passing the necessary legislation. Bennett expects the task force to complete its work by the end of the year.

GUILTY PLEAS IN NEVADA ONLINE BOOKMAKING CASE
Meanwhile, two Las Vegas residents pled guilty in federal court on Wednesday to running an illegal sports betting operation. Mitchell Garshofsky and Aaron Virchis each pled guilty to one charge of operating an illegal gambling enterprise. The two men were charged last March after investigators from the IRS and the US Secret Service determined the pair had transferred over $1m between their Cantor Gaming (now CG Technology) accounts while structuring the transactions to avoid financial reporting requirements. Investigators believed the transactions were intended to settle wagers placed with internationally licensed online sportsbooks, including BetCris, Matchbook and Pinnacle.

The men were originally charged with conspiracy to cause a financial institution to fail to file accurate currency transaction reports, but prosecutors agreed to drop these charges in exchange for the men pleading guilty to the bookmaking charges. Garshofsky, who will be sentenced on July 21, has agreed to forfeit $244k in cash and proprerty. Virchis will learn his fate on Aug. 11 and has agreed to forfeit $750k.